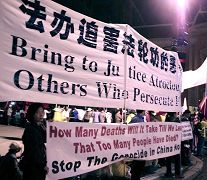 Falun Gong practitioners on a street close to the White House.

On the evening of April 19, 2006, Head of the Chinese Communist Party (CCP) Hu Jintao arrived in Washington D.C. To protest against and condemn the persecution of Falun Gong by the CCP and to call for the end of the persecution, Falun Gong practitioners unfolded banners at all street crossings around the White House that Hu had to pass. Their banners stated in both Chinese and English, "Falun Dafa Is Good!" "Stop Persecuting Falun Gong." "Bring Jiang, Luo, Liu and Zhou to Justice." "Bring Police Persecutors to Justice." "Call for Complete Investigation of Chinese Forced Labor Camps and Jails." "Immediately Stop Live-Harvesting of Falun Gong Practitioners' Organs." "The CCP Is Doomed." "Support 10 Million People Quitting CCP."

Falun Gong practitioners and the Chinese in the "welcome crew" stood next to each other. Many practitioners took the opportunity to clarify the truth to the "welcome crew." Ms. Wang came all the way from the U.K. She said, "Many Chinese asked me if what the display boards said was true. I could tell many of them had sympathy when I told them about the persecution."

Mr. Yang, a Falun Gong practitioner from Canada, told his fellow Chinese in deep and peaceful voice through a speaker, "The Chinese nation has five thousand years of splendid culture. The Chinese Communist Party is no equivalent of China. We love China as much as you do. But we don't love the Communist Party. Countless Chinese have been killed during the dozens of years of CCP's ruling. The CCP doesn't represent China in any way. We all hope that China will do well and Chinese people will prosper. China would have been better without the CCP and dozens of years of its political movements. We sincerely ask you to quit the CCP if you are a member. Leave yourself a route of retreat. You will witness the CCP collapse pretty soon."

Mr. Yang added, "We have the freedom of expressing ourselves here, but we can't do the same thing in China, not even have the freedom of belief. Didn't we leave China to look for freedom and better life? Why can't we go back to our motherland to enjoy freedom?" All Chinese listened quietly.

Falun Gong practitioners played a recording of Nine Commentaries on the Communist Party to their fellow Chinese at every street crossing. The peaceful but powerful voice pierced the sky. The listeners were shaken. They played some revolutionary songs and shouted slogans at first. But then they all concentrated on listening.

A Call for Justice

Hu Jintao's motorcade passed the street crossing east of the White House around 10:15 pm. No "welcome crew" was found at this crossing and the crossing at Lafayette Park, which they also passed. Dozens of huge Falun Gong banners stood out. Falun Gong practitioners shouted to the motorcade again and again, "Falun Dafa Is Good!" "Stop Persecuting Falun Gong." "The CCP Is Doomed."...

Hu must have seen the banners and heard the cries clearly when he passed and when he got out of the car.

A practitioner from New York, Mr. Wei said, "We hope Hu Jintao will treasure his opportunity. So many Falun Gong practitioners have died from the persecution! It has been so long! He should have realized it. We hope he will be able to tell the right and the wrong, give up his illusion about the CCP and choose the right path."

The "welcome crew" was quickly dismissed. Something dramatic happened at this time. The police moved the security bars back by a dozen meters. Falun Gong practitioners were able to get closer. They called neatly, clearly and loudly. Their compassionate voice penetrated the dark sky, shaking everyone's heart. Falun Gong practitioners shouted for more than a half hour and sent forth righteous thought before they left.

Many local Falun Gong practitioners stay overnight to send forth righteous thought with pure mind to eliminate the evil in other dimensions.

“Washington D.C.: People from all Walks of Life Support the 10 Million Resignations from the CCP and Call for Investigation of Chinese Forced Labor Camps (Photos)”

“As Long as Practitioners Are Still Held in Labor Camps and Prisons, CCP Abuse and Murder Will Not End”