On March 25, 2006, practitioners from Santa Fe, Albuquerque and Los Alamos, New Mexico held an activity at the Plaza in Santa Fe. Many tourists and locals were at the Plaza enjoying one of the first warm weekend days of the spring. Despite the happy atmosphere, the people readily expressed concern and were indignant upon learning of the Sujiatun Concentration Camp in China. 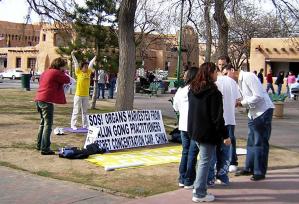 A couple from Colorado said they would be visiting some congressmen in Washington, DC the following week and promised to bring them the flyer about Sujiatun and express their concern. One of the congressmen they planned to meet was the wife's brother. The husband expressed his disgust with the Chinese Communist Party (CCP) and said that to do trade with China is only rewarding their terrible behavior and violation of human rights.

A local man told us that he kept up with news about the persecution of Falun Gong on the websites. Another local said, "I already learned about Sujiatun and I plan to write an article about it." Wanting to understand the reason why the CCP persecutes Falun Gong, a man talked with practitioners for a long time. During the discussion the man said, "Communism is like a religion, so the CCP does not tolerate any other beliefs." This man and others were grateful to receive a copy of the Nine Commentaries on the Communist Party.

Already aware of the cruelty of the CCP, an elderly couple from England readily signed our petition. The woman declared, "One day they [the CCP] are going to have to answer for their crimes."

New Mexico practitioners plan to hold another event at the University of New Mexico in Albuquerque, to alert the public about the atrocities at Sujiatun.

“Story: Put Oneself in Others' Shoes”