On the 21st of March 2006, Polish Falun Gong practitioners, with the help of the Polish Government, held a seminar entitled, "The World and China without Communism" in the Polish Parliament. More than one hundred people reserved seats beforehand and attended the discussion. The audience consisted of officials from many departments of the Polish Government, Members of Parliament, scholars, many foreign diplomats who live in Warsaw and others. This seminar was sponsored by Polish members of the European Parliament and The Epoch Times newspaper. Speakers included a Polish MP, a Polish sinologist, a Polish human rights expert, German Epoch Times editor Ms. Weiss and Falun Gong practitioner Mr. Zhang Erping. 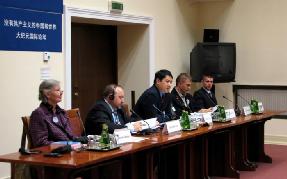 Mr. Zhang Erping, as the keynote speaker of the seminar, told the audience about Falun Gong and the Chinese Communist Party's (CCP) persecution against Falun Gong in the last few years in Mainland China. He also told the audience about the recently disclosed shocking news of the CCP's harvesting organs from live Falun Gong practitioners at Sujiatun Thrombosis Hospital in Liaoning Province and cremating the bodies to eliminate evidence. He showed pictures of tortured Falun Gong practitioners, which reminded many Polish people present of the time when the Communist Party brutally persecuted the population in Poland. Zhang Erping thanked the Polish Government and people for their support for Falun Gong, and urged the international community to continue to be concerned and help to stop the CCP's violation of Chinese people's human rights in Mainland China.

With the facts and logics of social science, Mr. Zhang Erping analyzed the CCP's situation of being in crisis both in and outside China. He pointed out that China's current so-called wealthy society is actually putting on a false show of peace and prosperity. The figures estimated by Mainland Chinese officials and the World Bank do not match, but are only a temporary phenomenon in small regions. At the same time, The Epoch Times newspaper published the Nine Commentaries on the Communist Party and triggered the "Tide of Quitting the CCP" in Mainland China. To date, there have been more than nine million people who have openly withdrawn from the Chinese Communist Party and its affiliated organizations. The foundation of the CCP has been shaken and its end is very near.

Zhang Erping pointed out that the CCP has constructed the most corrupt and wicked regime in history. From the way it persecutes kind-hearted Falun Gong practitioners, we can see that in order to maintain its dominance and deceit, the CCP does not hesitate to spend a quarter of the nation's total income on the persecution of Falun Gong and activate the whole country's propaganda and persecution system. This is something very unusual throughout history. Zhang Erping's explanation on the Falun Gong topic and the objective analysis of the current situation in Mainland China greatly interested the audience.

German Epoch Times editor Ms. Weiss told the story of The Epoch Times' development, as well as the worldwide impact made by the publication of the Nine Commentaries. At the same time, she introduced the situation of people quitting the CCP in China and the strong effects on overseas society made by the human rights movement initiated by Chinese lawyer Gao Zhisheng.

The Polish sinologist emphasized the importance of the Nine Commentaries, a piece of literature which, for the first time, allows the Chinese people to objectively see for themselves the true, dark history of the Chinese Communist tyranny. He said the commentaries are worth reading by everyone who cares about China's issues. According to his analysis and estimation, during its rule in Mainland China, the CCP has caused the unnatural deaths of nearly two hundred million people. This is the biggest tragedy in the history of mankind. This figure surpasses by far the now-commonly-believed number of eighty million deaths. He also pointed out that Falun Gong is part of China's authentic traditional culture, and not a so-called "evil [slanderous term omitted]". On the contrary, the CCP is the real evil cult and moreover, is more immoral than any other kind of evil cult.

A Polish human rights expert pointed out that in order to maintain its dominion, the CCP would persecute any group or community with a different ideology or belief. He urged everyone to boycott the 2008 Olympic Games which will be held in Beijing, because such an important international event like this being held in a country under the CCP's autocracy will clash with the Olympian spirit. 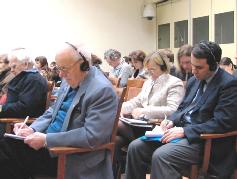 The audience takes a strong interest in the seminar

The seminar lasted three and a half hours, and the participants responded actively and would not leave the conference room until another seminar group needed to use it. Many Polish participants said that they had been persecuted by the Communist Party. Through this seminar, they have now gained a deeper understanding of the villainy of the Communist Party. They were supportive and sympathetic of Falun Gong's acts of justice.

It is reported that the newly elected Polish government hates Communism to the bone. As soon as they took up the reins of the government, they started a legal investigation into Communist bureaucrats who participated in persecuting the Polish people when the Polish Communist Party ruled.