(Clearwisdom.net) Upon hearing the news about the Sujiatun Concentration Camp set up by the Chinese Communist regime to kill Falun Gong practitioners for their organs, Peruvian practitioners were very concerned and saddened. To end the inhuman crimes as soon as possible, they printed a special Spanish-language newspaper detailing the crimes in the camp and distributed the paper to media outlets in Peru, the government and the public.

Practitioners protest in front of the Chinese Embassy

For two consecutive weeks, practitioners protested the atrocities in the Sujiatun Concentration Camp in front of the Chinese Embassy in Lima. On the morning of March 28, joined by practitioners from the U.S., Canada and Australia, they rallied in front of the embassy to support 9.2 million Chinese who have quit the Chinese Communist Party (CCP) and its affiliated organizations. They called on the international community to investigate the Sujiatun Concentration Camp and called for action to end the CCP's brutal persecution of Falun Gong.

Su Ying, a volunteer organizer of the Peru Falun Dafa Association, called upon the Chinese Embassy: "The CCP's genocide of Falun Gong practitioners in the Sujiatuan Concentration Camp is a human disgrace and cannot tolerated by heavenly principles. Stop the persecution of Falun Gong immediately. Heaven will punish every perpetrator of the persecution." Su also pointed out that 9.2 million Chinese had bravely quit the evil party and its affiliated organizations since the Nine Commentaries on the Communist Party was published in November 2004. She called upon officials inside the Chinese Embassy to learn from Chen Yonglin and Hao Fenjun, former CCP officials who bravely abandoned the evil regime and quit the CCP, for their own good. 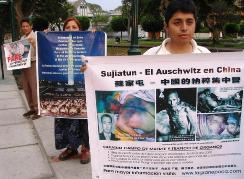 Telling everyone about the atrocities of the CCP

Dr. Dayong Li, director of the Global Service Center for Quitting the CCP, said, "On the eve of this great historic change, everyone and every country should take a stance on the CCP's atrocities and should not sacrifice conscience for commercial interest. South America shall not become a safe haven for the CCP officials." In addition, Dr. Li also called upon officials of Chinese Embassies and consulates to quit the evil party as soon as possible.

Practitioner Ms. Wang Yuzhi was brutally persecuted in China and later rescued to Canada. She recounted the persecution that she suffered in China. Regarding the fact that so many practitioners have disappeared, she believed that they may have been sent to concentration camps such as the one in Sujiatun, where they are being killed for their organs. She called on the international community to investigate the whereabouts of these missing practitioners.

Ms. Jane Dai from Australia also joined the rally with her little daughter Fadu. She said that she had traveled to 41 countries with her daughter to tell people about the truth of the persecution of Falun Gong. Ms. Dai said, "The atrocities in the Sujiatun Concentration Camp can only be carried out by demons." She recalled that she was detained together with some 20 practitioners in the Tiananmen Police Station in October 2000 and said that she was very concerned about their whereabouts now.

Practitioner Harry Usseglio is businessman and holds a MBA degree. He said, "Chinese communist officials, Falun Gong is a peaceful practice and we practitioners have no inclination to violence. We come here to tell you: Stop the persecution of Falun Gong now!"

Gose Reina, a student of the Universidad Nacional de Ingenieria (National University of Engineering), said, "The Chinese Communist party persecutes Falun Gong, however, the party is not the equivalent of China. Falun Gong is popular in China and welcomed by the public. Now the practice has spread to the whole world and we Peruvians like it very much."

Dr. Tian Xie, of the Epoch Times newspaper and a professor of the business school of Drexel University based in Philadelphia, called upon the officials inside the Chinese Embassy: "The CCP has persecuted Falun Gong for nearly 7 years, and you all have learned the truth. You know that all the activities of Falun Gong practitioners around the world have no political pursuit, and you know that more than 9 million Chinese have quit the CCP since the Nine Commentaries on the Communist Party was published in 2004. I hope you will distance yourselves from the persecution, for your own and your families' future. I hope you will quit the party with either your true name or a pseudonym."

During the rally, the Lima police dispatched several police officers to the site. Upon seeing that the rally was very peaceful and the participants were very rational, they accepted copies of the Nine Commentaries and Spanish-language Epoch Times and then left. Inside the guarded Chinese Embassy, now and then some officials watched the rally from windows. There were two officials who took photos of the crowd on the sly. When practitioners noticed this and took photos of them, they quickly backed off.