(Clearwisdom.net) On April 18, 2006, "The Coalition to Investigate the Persecution of Falun Gong in China" (CIPFG) held a press conference at the National Press Club in Washington DC, demanding a complete investigation into all forced labor camps, prisons, detention centers, custody centers, hospitals, mental hospitals, and related facilities where Falun Gong practitioners have been incarcerated in the past seven years. The CIPFG also invited international organizations and governments to join in this independent investigative organization to work together to conduct a truly thorough investigation into the CCP's crimes. 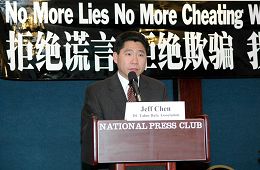 The recently-formed CIPFG, led by the Falun Dafa Association and Falun Gong's Minghui/Clearwisdom website, plans to complete all investigations into every forced labor camp, prison, detention center, custody center and hospital where Falun Gong practitioners are detained prior to July 1 when the CCP's law on live organ harvesting takes effect. CIPFG therefore demands immediate access to all these facilities, and permission for the team of international investigators to conduct an independent, direct investigation and evidence collection without interference. The CIPFG invites human rights organizations, people from legal circles, governments and organizations to join the investigation team to conduct the investigation together.

Chairman of CIPFG Zhao Zhangji said, "In the past seven years, we have collected a large number of materials about the persecution, including witnesses and evidence providers." The CIPFG has officially submitted a written application for a complete investigation.

Zhao Zhangji assured that this will be a complete and thorough investigation. Once the investigation has been completed, the CIPFG will announce the results to the public.

Zhao Zhangji said that over the past seven years, Falun Gong practitioners have conducted peaceful activities, including collecting signatures, holding parades, anti-torture exhibits, trips on foot, bicycle tours and car parades, to persistently appeal to the international community and to raise people's awareness of the persecution of Falun Gong practitioners in mainland China. 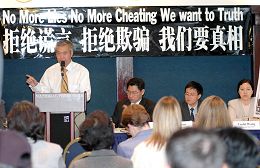 From the recording, doctors and staff who were being questioned could clearly be heard admitting straightforwardly that they use Falun Gong practitioners' organs for transplant surgeries. Some even said that all organs are from Falun Gong practitioners. The following is the transcript of a recording of a dialogue between the investigator and a doctor at the Zhongshan Hospital affiliated with Fudan University in Shanghai:

Investigator: You are not going to give me a kidney from a dead person, are you?

Doctor: Of course we will give you a good kidney, why would we give you a bad one?
Investigator: ...Do you have the ones from people who practice Falun Gong?

Doctor: Everything that we have here are of this kind.

WOIPFG said they have prepared more evidence for the international judicial organizations to investigate.

WOIPFG has confirmed through its investigations that many military/armed police hospitals and transplant centers in China are suspected of involvement in harvesting organs from live Falun Gong practitioners and using these organs for transplants.

After the Sujiatun Concentration Camp was exposed on March 9, some hospitals in Northeast China that were investigated stated that they received a notice to temporarily stop performing organ transplant surgeries. Following the Ministry of Health's "Interim Regulation for Human Organ Transplant Practice" published on March 27 that will take effect on July 1, hospitals and major transplant centers in China not only resumed their operations, but are also performing an increasing number of organ transplants.

Many hospitals in China stated that ample organ supplies are available in April and May, after which it will be difficult to obtain an organ. This shows the Chinese Communist Party (CCP) is slaughtering Falun Gong practitioners who serve as organ suppliers. The fact that these cases emerge from many provinces, cities and autonomous regions shows they are only a part of the genocide directed by the CCP Central Committee.

Chief editor of The Epoch Times Ms. Guo Jun played a video that revealed some particular testimony about the live organ harvesting from Falun Gong practitioners in the Sujiatun area.

The witness said, "It is agonizing to recall the past. The organs harvested from a living human being fetch a much higher price than from a dead body. After the organ removal, many Falun Gong practitioners were still alive and breathing, but some of their bodies were directly thrown into the crematory. No trace of their bodies is left. Sometimes the surgeons would stitch the openings and ask their families or representatives of their families to sign the agreement for the bodies to be cremated. Some families had no idea the organs had been removed. Moreover, some practitioners transferred from prisons were very healthy. But they were injected with psychiatric drugs that severely damaged their central nervous system. Then they were transferred to Sujiatun Concentration Camp for additional torture until their organs were removed and their bodies were cremated."

The female witness also revealed one entry in her ex-husband's diary, "The patient (Falun Gong practitioner) was administered anesthesia, lying on the operating table. When using scissors to cut open her clothes, a small box dropped out. Inside the box were a Falun badge and a small card. The words on the card were, 'Mom, Happy Birthday.'" The female witness said her ex-husband was completely devastated.