Make a Choice Between Profit and Conscience (Photos)

(Clearwisdom.net) On April 18, 2006, one day prior to the visit of the head of the Chinese Communist Party (CCP), Falun Gong practitioners from different places held a big rally in Washington DC, the capital of the US, to call upon the international community to stop the CCP's persecution of Falun Gong and stop the mass killing.

The rally was jointly organized by the "Falun Dafa Association" and "The Coalition to Investigate the Persecution of Falun Gong in China" (CIPFG). Banners reading, "Bring Jiang, Luo, Liu and Zhou to Justice," "Stop the Persecution, Stop the Killing," "Protest the CCP's Inhuman Killing, Calling on the International Community to Investigate and Urgently Rescue." The stage was surrounded with white wreaths. Participants wore white flowers on their chests, and unfurled white banners. The rally was solemn and respectful.

According to information collected, the CCP's criminal act of harvesting organs from live Falun Gong practitioners, selling their organs for profit and then cremating the murdered bodies to destroy the evidence started in late 2000, reached a peak from 2001 to 2003, and organ harvesting is still taking place. No forced labor camps, prisons, detention centers, hospitals (especially police hospitals and military system hospitals), or extensions of forced labor camps and prisons (secret concentration camps) can escape the responsibilities for such atrocities.

After the witness revealed the criminal acts in the Sujiatun Concentration Camp, the CCP spent three weeks disposing of eyewitnesses and covering up the scene of the crime, and then welcomed the international community to investigate. At the same time, Falun Gong practitioners have learned that there are at least 36 concentration camps similar to the secret concentration camp in Sujiatun. But recently, under the orders of the diehard followers of Jiang and Luo's regime, the Falun Gong practitioners in these secret concentration camps have been urgently transferred to forced labor camps, prisons, hospitals and related facilities to continue being detained. These forced labor camps, prisons and hospitals coordinated together, and the detained Falun Gong practitioners who are used as "live organ suppliers" are facing the threat of having their organs removed while they are still alive and their bodies cremated to destroy the evidence at any time. Therefore, overseas Falun Gong practitioners urgently established the Coalition to Investigate the Persecution of Falun Gong, urging the CCP to immediately open all forced labor camps, prisons, detention centers, hospitals and other related facilities for the international community to investigate.

Dr. Terri Marsh heads a not-for-profit coalition of lawyers from around the world prosecuting CCP officials for their crimes against Falun Gong. As lead counsel in a lawsuit against former Chinese dictator Jiang Zemin, Dr. Marsh condemned the genocidal killing taking place in forced labor camps and detention centers across China. She underscored the urgency of the situation, pointing out that a mass slaughter is underway right now. She cited details mentioned in a witness's testimony. The witness was a main surgeon in the Sujiatun Concentration Camp. He wrote in his diary, "The patient (Falun Gong practitioner) was administered anesthesia, lying on the operation table. When using scissors to cut open her clothes, a small box dropped out. Inside the box were a Falun badge and a small card. The words on the card were, 'Mom, Happy Birthday.'" The doctor suffered extreme mental anguish day and night for participating in these criminal acts.

Renowned tenor Guan Guimin was invited to the rally to make a speech and sing a song. In his speech, he pointed out that everyone's acts will leave a record in the cosmos, Gods are watching everyone's actions. In the face of money and profits, everyone will place their conscience and morality. One's future will be written by their choices made today. 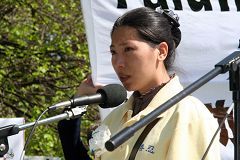 Representative of the persecuted Falun Gong practitioners in mainland China, Tianjin practitioner Ms. Mu Xiangjie, who was recently arranged to come to the US by the United Nations, spoke to the audience, choking with sobs. Two years ago, after she escaped from China, she had lost the ability to speak. In the past two years, she resumed her ability to speak by persisting in practicing Falun Gong. Today, she could step forward to expose the CCP's persecution of Falun Gong practitioners in forced labor camps, and she felt very fortunate. While being illegally detained in China, she was subjected to the persecution that is taken as "quite common" in these forced labor camps, such as brainwashing, sleep deprivation for many days, and being handcuffed and shocked with electric batons. She once witnessed a woman practitioner being carried into the forced labor camp while being wrapped in a quilt. Later, this practitioner was tortured to death in the forced labor camp.

Ms. Mu Xiangjie pointed out there are still many more Falun Gong practitioners who are suffering torture and abuse in forced labor camps. The CCP commits heinous acts beyond people's imagination, and she requested the international community to proactively conduct investigations.

The SOS Van Tour organized by "The Global Coalition to Rescue Persecuted Falun Gong Practitioners" successively arrived in Washington DC. Participants are Falun Gong practitioners from St. Louis, Chicago, Dallas, Toronto, Boston and other areas in North America. A representative of the participants, Ms. Mao, stated that the CCP's killing of Falun Gong practitioners has been far more than an issue of persecution of belief and human rights: it tests everyone's soul, and urgently requires everyone and every government to make a choice between profit and conscience. This choice will ultimately determine the destiny of everyone and every government.