Considering what they were protesting, a march and rally by about 200 practitioners of Falun Gong through downtown Seattle Monday appeared remarkably tranquil.

That might be owing to the spiritual movement's emphasis on meditation and gentle exercise, which seems incongruous with a heated demonstration.

But the protesters' message on the eve of Chinese President Hu Jintao's visit to Seattle today and Wednesday was grisly. The Chinese government, they alleged, is killing Falun Gong followers in a Nazi-style concentration camp in Liaoning province and harvesting their organs. 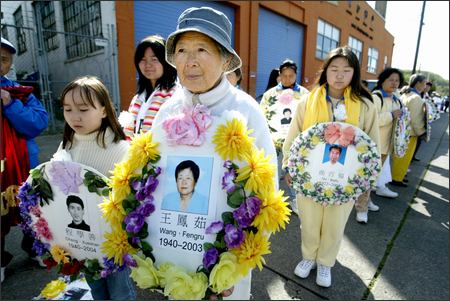 Li Li Hu holds a picture of a friend, Wang Fengru, who was allegedly killed in a concentration camp. Hu came up from Los Angeles to join Monday's march in Seattle by Falun Gong practitioners.

The protesters, who came from as far as San Diego, based their claims on reports by Falun Gong supporters in China and articles in The Epoch Times, a newspaper and Web site [...].

"Our main message is to let China's president know that the world knows about the death camp," said Allison Pan, a Seattle software engineer who helped organize the demonstration. "We demand a full investigation."

Last week in Beijing, Chinese officials denied allegations that as many as 6,000 practitioners of the banned Falun Gong were killed for their organs, calling the claims "completely slanderous and baseless lies."

A spokeswoman for the U.S. Embassy in Beijing told The Associated Press that the U.S. government has asked the government for more information.

Monday's protesters, many wearing blue and yellow -- cheerful colors that suggest the sky and light, some said -- rejected the Chinese government's denials of mistreatment of Falun Gong practitioners.

Bin Li said she was arrested in Tiananmen Square in 2000 for unfolding a Falun Gong banner and was later deprived of sleep and tortured with an "electric baton."

"It's impossible to get the full evidence," said Li, who lives in Los Angeles and carried a photo of Sun Lianxia, a friend who she said was tortured to death by the Communists.

The Chinese government banned Falun Gong in 1999 after its numbers had surpassed the 60 million members of the Communist Party.

The ban was "because of jealousy," said Li Li Hu of Los Angeles, who carried a photo of Fengru Wang, a woman allegedly tortured to death in 2003 during imprisonment in China. "Too many people practice Falun Gong. The Communists are threatened by numbers."

The Chinese government deals with the Falun Gong the same as it does other persecuted groups, said David Zhang, a computer engineer from San Jose, Calif.

"They don't treat Christians any better than they do Falun Gong," he said.

The demonstration was the largest ever in Seattle of Falun Gong supporters, who number 70 to 80 locally, Pan said. About two-thirds of the protesters came from out of state, with sizable contingents from California and British Columbia.

The march started in the International District and ended in Westlake Park with a rally and sidewalk theater, including dramatizations of surgical organ harvesting and prison torture.

Though the world vowed not to let the atrocities of Nazi Germany happen again, "history is repeating itself before our very eyes," said Dr. Alejandro Centurion, a neurologist from Monterey, Calif., and a Falun Gong supporter.

Citing The Epoch Times, he said the reports of organ harvesting were corroborated in China by the wife of a neurosurgeon and a veteran military physician.

President Hu did not start the persecution of Falun Gong practitioners, said Yang Feng of Bellevue. But Hu, she said, "has the responsibility to end it."

ABOUT THE FALUN GONG

Falun Gong is banned in China, where the government considers it a [slanderous term omitted] Practitioners say it is not a religion, though it contains some tenets of Buddhism. Practitioners credit Falun Gong with relieving a variety of health problems, such as insomnia, joint problems, respiratory ailments -- even cancers.