(Clearwisdom.net) On April 15, 2006, Falun Gong practitioners in France held an event to solicit signatures in the 13th District of Paris (Chinatown) to expose the secret killing of Falun Gong practitioners in China's labor camps and prisons after practitioners' organs were harvested while they were still alive and their bodies were cremated to eliminate the evidence. They also pointed out the Chinese Communist Party's (CCP's) scoundrel behavior of hurrying to remove the witnesses and material evidence after the crime was exposed last month, in order to deceive the people of the world. Practitioners demanded that the CCP open up all labor camps and prisons which have detained Falun Gong practitioners immediately, to be investigated by international organizations and allow "The Coalition to Investigate the Persecution of Falun Gong in China" (CIPFG) to go to China to investigate the crimes. They also called upon the international community to pay close attention to and stop the bloody persecution of Falun Gong by the CCP regime.

A representative of the Falun Gong practitioners read out the announcement about the CIPFG being initiated by the Falun Dafa Association and Minghui.net (the Chinese version of Clearwisdom) and invited related international organizations, state organs and media to form a joint investigation group. The coalition also demanded that the investigation and collection of evidence in the mainland be independent, direct, and not be subject to intervention by the CCP. The coalition will conduct a comprehensive investigation of the truth of the persecution of Falun Gong in secret concentration camps. Many French people signed their names to express support after learning about the CCP's persecution of Falun Gong and the secret concentration camps. 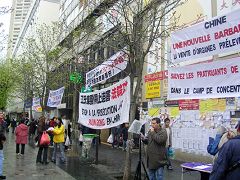 A French woman told the reporter, "I think that it is very important to collect signatures. It can allow western people to realize what is happening in China. The human rights status in China is still poor. We must join hands to engage in the struggle. We French people support the Chinese people. I also hope that our politicians can pay more attention to the human rights issue in China while they engage in business transactions with the CCP."

Another French person said, "First, I do not think the CCP should persecute belief. Every one has a freedom of thought and of engaging in whatever activity they want to do. I think the western society should pay attention to what is happening in China, and make the CCP government change their attitude toward Falun Gong though diplomatic means."

Another French woman was strongly discontented with the CCP's attempts to export the persecution of Falun Gong practitioners to France. She said, "Falun Gong is peaceful, yet it suffered cruel persecution in China, and was not allowed by the authorities. Last year when the Chinese leader visited France, the French police rudely interrogated Falun Gong practitioners on the Champs-Elysees Avenue, which was really intolerable. It was surprising that the French government adopted an unfriendly attitude toward Falun Gong because it yielded to the CCP for economic benefits."

A Vietnamese person who had gone through the brutal persecution by the Communist Party in his home country had tears in his eyes after hearing the truth of the persecution in China, told to him by Falun Gong practitioners.

“United Kingdom: Appealing in Front of the Prime Minister's Office for an Investigation into the CCP's Labor Camps (Photo)”