The following is a translation of excerpts from a letter to the Minghui website by an anonymous person from mainland China believed to be a Falun Gong practitioner in Daqing City.

While illegally detained at the Daqing Longfeng Detention Center, I heard a lot of stories from an inmate, who is now serving his time at Daqing Prison, about how the police were dealing in organs of Falun Gong practitioners. At the time I didn't pay much attention, as I thought he was just trying to scare me. But now, when those stories are looked at in hindsight, I think they were not groundless. So here I am making the following disclosures based on my recollections.

2. The death toll of Falun Gong practitioners at the Longfeng Detention Center does not count in the death statistics. At the peak of the persecution against Falun Gong, those beaten to death were not reported to higher authorities. If no family members asked about them, their bodies would be left unattended or taken directly to the boiler room for cremation. If their family members did come for an explanation, the prison authorities would try to end the case by telling lies or bluffing. At best, they would offer money to settle it.

3. Falun Gong practitioners who refused to be brainwashed would be taken to the northwest of the country, where more prisons are being built and no one is able to escape, as the prison's location is completely isolated. Once there, practitioners won't be allowed to come out anymore even if they agreed to give up their belief. They would be kept there indefinitely.

4. Practitioners whose organs are to be removed are not shot dead. Instead, they are knocked out first and then taken into a vehicle standing by, where the still living victims are cut open for their organs. Sometimes victims were in such excruciating pain that they pleaded, "Hurry up. Please let me die first!"

This reminds me of Falun Gong practitioner Wang Bin, who was a computer engineer at the Daqing Institute of Oil Exploration and Development and a second prize winner of a national science award. On September 24, 2000, he was savagely beaten to death by police officer Feng Xi of the Daqing Labor Camp. His body, after the organs including the heart and brain were harvested, was placed in the morgue of the Daqing People's Hospital. The following photo shows Wang Bin's remains. 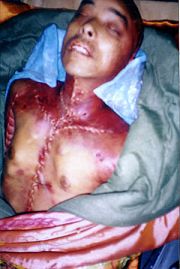 Wang Bin's case came to light only with the help of other Falun Gong practitioners and Wang Bin's family. Who knows how many more cases of practitioners who have been persecuted to death and whose organs have been taken - when they were still alive - still remain undiscovered and unknown?

Additionally, I heard that in order to persecute Falun Gong, Daqing City planned to build a secret prison somewhere between the Construction Tower and Daqing Detention Center. But because of a shortage of resources, among other things, the plan didn't go through.

The frenzy of the Daqing police in persecuting Falun Gong has so frightened the residents that they not only all installed gate guards, but also would bolt their doors when they are at home during the daytime. What they are guarding against are police rather than thieves. To date, there are 56 Daqing Falun Gong practitioners who have been confirmed dead due to persecution. There are countless more practitioners who have been illegally fired from their jobs, fined, tortured, extorted out of money, detained, forced to work at hard labor, and sentenced to prison. Nowadays people are avoiding the police like the plague. People used to say: the police and bandits are of the same family. But now whenever they are talking about the police, they'd say: Daqing police are even worse than bandits because at least bandits are still human, whereas Daqing police don't even have human feelings.

The Daqing police have become professional criminals. When they arrest Falun Gong practitioners, they don't produce any warrants or provide any grounds. They don't even notify practitioners' families. Judging from the wicked record of the Daqing police, it is not surprising if they are found to be involved in harvesting organs from living humans and selling them for profit.

“Taiwan: the Truth Spreads at the Anniversary of National Chiao Tung University (Photos)”