The current head of the Chinese Communist Party (CCP) will visit the U.S. next week and meet with President Bush. To stop the 7-year brutal persecution and to investigate the recently exposed atrocities of the CCP in labor camps where the regime harvests organs from living practitioners and cremates the remains to destroy evidence, at around noon of April 13, San Francisco Falun Gong practitioners held a press conference in front of the Chinese Consulate to send out their request to President Bush, asking him to bring up the following points while meeting with Hu:

1. Open up all of China's labor camps, jails and hospitals for international investigation.

2. Allow IGFG to go into China and research the facts of the persecution of Falun Gong. 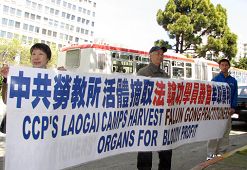 Since the CCP's atrocities in the Sujiatun Concentration Camps were exposed in early March, more and more eyewitnesses have stepped forward, testifying that the regime has set up similar concentration camps nationwide to murder Falun Gong practitioners and profit from their deaths. Reporters from the Sound of Hope recently phone interviewed hospitals and transplant centers in Hubei, Shanghai, Liaoning, Beijing and Shan'xi. Many of the interviewed doctors said that patients should make good use of the current opportunity, as livers and kidneys from living donors will be available till end of this April before the traditional May 1st long holiday in China. After this period, however, the number of available organs will decrease. Meanwhile, many Chinese doctors have acknowledged that these livers and kidneys from living donors are from Falun Gong practitioners.

Practitioner Chen Zhao pointed out that the CCP remained silent for three weeks after the atrocities were first exposed in early March. However, the regime started to respond to this claim recently and even "invited" international community to perform an investigation at Sujiatun. At the same time, its mouthpiece media outlets said that the regime will pass regulations to ban the trade of human organs. However, the regulation will not be effective until July 1.

Zhao said that all the collected evidence show that the regime is now trying to destroy evidence of its crimes. The situation in China is very urgent, as a large number of Falun Gong practitioners are facing arbitrary killing and cremation.

During Hu Jintao's visit, Zhao said that San Francisco practitioners will fly to Seattle and Washington DC to participate in large-scale truth-clarification activities and to protest against the CCP's persecution.

While the persecution of Falun Gong is spearheaded and implemented by the Jiang Zemin regime and the Chinese Communist Party, and Falun Gong practitioners have no personal issues with Hu, Zhao said that Hu is nevertheless responsible because the persecution has been going on for years since he took his current position.

"The longer the persecution lasts, the more Hu is accountable. He is at a critical moment We hope that Hu will make the right choice for his conscience and the welfare of China and all Chinese people to stop the persecution of kind-hearted people." Chen said.

The Coalition to Investigate the Persecution of Falun Gong in China (CIPFG), was initiated by the Falun Dafa Association and the Clearwisdom website recently. Chen said that local practitioner members of the CIGFG would come to the consulate to apply for visas next Monday. A press conference will be held regarding this important step of this historic investigation.