On Sunday, April 9, 2006, Falun Gong practitioners in Ireland held an activity to collect signatures calling for an end to the persecution by the Chinese Communist Party (CCP) on the famous pedestrian street of Dublin--Grafton Street. People and tourists were shocked and indignant after seeing the banner saying "The CCP's Sujiatun Concentration Camp Takes Organs from Living Falun Gong Practitioners." They signed the petition on the letter to their Congressmen. To make the petition more convenient, practitioners prepared addressed envelopes. A lot of people said they will mail the protest letter to their Congressmen after signing the petition. Some people brought the report about the Sujiatun Concentration Camp and the petition letter to their families. One lady took many petition letters for her colleagues after signing her name. A lot of people said that the persecution of Falun Gong practitioners by the CCP in the labor camps and concentration camps was really too terrible. Practitioners gave them the English version of "Nine Commentaries of the Communist Party" in hopes that they could learn about the history of the CCP more clearly. 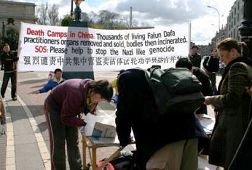 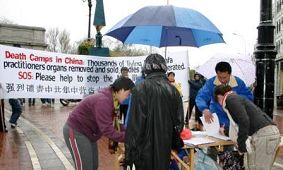 Some Chinese people expressed sympathy to Falun Gong after learning about the savage persecution by the CCP. A middle-aged Chinese man first said, "What is the use of this!?" upon hearing about the petition and protest. The practitioners told him they will send the letter to the government departments so that people from all walks of life in society can condemn the persecution. After listening to the explanation, he signed his name at once.

One older married couple who traveled to Ireland said they believed the authenticity of this incident after hearing about the CCP taking organs from living Falun Gong practitioners. They asked for the Nine Commentaries in Chinese to take home and read. One woman from China listened to the truth told by a practitioner for more than half an hour.

When the activity was to finish, a light rain fell from the sky. However, many people still came to sign. Almost all the prepared protest letters were signed. The crimes of CCP's persecution of Falun Gong received more and more close attention by people and were condemned by all.

“The Persecution of Yu Xiuhua and Her Family”