A recent article on Clearwisdom, "Falun Dafa in Europe (VIII): Germans Learn and Practice Falun Gong" (http://www.clearwisdom.net/emh/articles/2006/2/20/70115.html), relates that, "In Germany, Falun Gong is everywhere. Even in some very small villages, people can hear the Falun Gong exercise music. Originally, there were only a few practitioners in each area and most of them were new practitioners. However, through study and cultivation experience sharing, they gradually increased in number and started to tell people the facts of the persecution and promote Falun Gong. One or more practitioners together hold up a part of the sky. More and more people have been offered the chance to step onto the path of cultivation and return to their original, true self."

He searched the Internet and noticed that the information he found on the Falun Gong websites was very different from what the Chinese Communist Party had portrayed. He started going to another city in order to learn the exercises, and started to read the book, Zhuan Falun. Frank felt that the Falun Gong exercises were very good. They were more effective than any of the exercises he had learned before. Zhuan Falun helped to solve many of the questions he used to have. He truly started to understand the real meaning of cultivation. After comparing and contrasting, one year later, he started to genuinely walk on the Falun Gong cultivation path.

Through cultivation practice, Frank feels mentally and physically healthy and harmonious, and his whole body has become calm and peaceful. He is also able to accomplish his course work with ease. At the beginning, his parents did not understand why he practiced Falun Gong. Seeing the positive changes in him, they gradually changed their mind and started to become interested in Falun Gong as well. They often talk about it together.

Frank frequently organizes and participates in different kinds of truth clarification activities in order to expose the Chinese Communist Party's persecution of Falun Gong. He believes that since many Chinese people do not understand Falun Gong, he should do more here in Germany so that the Chinese people he meets will learn the truth of Falun Gong. Frank feels that since he has benefited so much, he should do something in return. This is very important to him. He hopes that these efforts will help end the persecution in China sooner, and that more Chinese people will learn the truth as well.

Jorg, a student majoring in politics, started practicing Falun Gong at about the same time as Frank. He hopes that people in China will be allowed to practice freely, and that people with different beliefs will have the freedom to believe whatever they want. However, in China, if one practices Falun Gong, he or she will be persecuted, and some are even tortured to death. The Chinese Communist Party does not allow people to practice Falun Gong. Jorg hopes that the persecution will stop soon. Chinese people should be able to practice Falun Gong freely. 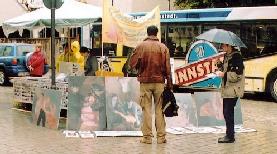 "Europeans and people around the world should all wake up, and together we should stop this atrocity"

Christa has been practicing Falun Gong for three years. After she started the practice, she was able to stay calm. She has a son who frequently loses his temper. Before Christa practiced Falun Gong, she would always be mad at him. Now, she calmly explains things to him. She also tells him that losing his temper will not solve any problems, thus her son has begun to calm down too.

At first, Christa just practiced at home. About 6 months later, she went to a New York Falun Dafa experience sharing conference. For the first time in her life, she practiced the exercises in public, and talked to the public. She learned the importance of clarifying the truth. She helps people in Europe learn that Falun Dafa is great, and she exposes the ill-treatment that Falun Gong practitioners receive in China. Now, Christa frequently participates in Falun Gong activities in Passau and other parts of Europe. 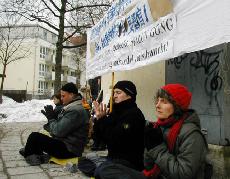 When she saw the reports on the Sujiatun death camp, Christa traveled about 200 miles to Munich in order to participate in the protest in front of the Chinese consulate. She told the reporters, "I was shocked to hear that there are concentration camps in China. The German government preserves the concentration camps that the Nazis built to imprison Jews. They have changed them into museums in order to remind people to respect humankind. Now, similar things are happening in China. What is worse is that the camps in China even sell Falun Gong practitioners' organs for profit, and then kill them." In addition, Christa said that because Chinese people are gradually awakening, they know that they have to take other paths. The exception is the CCP. More and more people are willing to reveal the truth about what is happening in China; hence, the secrets of the death camps are being exposed. Finally, she emphasized, "I came all the way here to expose the CCP's criminal behavior in setting up these concentration camps. Europeans, and all the people in the world should wake up and work together in order to stop this atrocity."

The city of Passau is located in eastern Bavaria and is bordered on the east by the Czech Republic. It ranks as one of the seven cities with the best topography in the world. Visitors come to Passau in an endless stream throughout the year. Passau's geographical position is unique as it is located at the point where the Danube, Inn and Ilz rivers meet. In addition, it is a city that has the most floods in Germany. Hence, the first floors of the houses are normally not inhabited, and they have very high stairs, to take people to the upper floors.

As Passau is the Sister City of Liuzhou City in Guangxi, China, local citizens are very interested in things that are happening in China. However, a few years ago, they knew little about the persecution against Falun Gong. There are no Chinese practitioners in Passau, and only a few Western practitioners. Through their tireless effort, now, more and more residents in Passau know the truth of Dafa. They've come to know the nature of the CCP, and more and more people have expressed their support of Dafa.

On August 21, 2004, local Falun Dafa practitioners held an anti-torture exhibition in the city center in order to call attention to the persecution. Because the local newspaper had reported positively on our activity the day before, a city MP who heard the news came to see the anti-torture exhibit. He asked whether Falun Gong was persecuted with such brutality in Liuzhou, their sister city, and hoped that practitioners could provide him with accounts of individual persecution cases which are taking place in Liuzhou. He guaranteed that in the next city senate meeting, he would raise the issue of the persecution against Falun Gong in Liuzhou and the issue of the relationship between Passau and Liuzhou.

On August 13, 2005, in the old town's Catholic area, a world youth day event took place with the theme of "Everyone is a friend." Three nuns accepted Falun Gong truth-clarifying materials. A man came to the information desk and told the practitioners that he was going on a pilgrimage soon. He would pass by many places for different focuses. He was planning to tell people about the human rights issues in China. He asked for more leaflets so that he could distribute them. 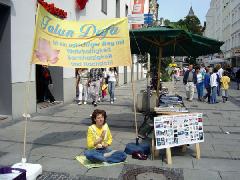 On a weekend at the end of September in 2005, the international "Truthfulness, Compassion, and Tolerance Art Exhibition" was held in the Holiday Inn in Passau. Visitors were deeply impressed with the exhibition. One artist came by immediately after he received the booklet. He said that he very much appreciated the painting, ""Heaven and Earth Become One." He thinks that artists should always present the positive side of the world. This was what he had been pursuing. He believed that this painting is a masterpiece that will guide art toward the righteous path.

After explaining all the paintings, the guide at the exhibition also talked about the CCP's persecution against Falun Gong. In order to see the true side of the evil CCP, this artist promised that after going home, he would read the "Nine Commentaries on the Communist Party."

Another woman was very moved after seeing the paintings. She talked with the guide for a long time. She commented that the Communist Party has brought such devastating disasters to the world, and said we cannot let it come back. We should prevent the tragedy from replaying.

On October 22, 2004, Clearwisdom published the article, "Germany: Passau Residents Concerned about the Persecution of Falun Gong Practitioners in Chinese Sister City Liuzhou" http://www.clearwisdom.net/emh/articles/2004/10/30/54023.html, which introduced the anti-torture exhibit held by Falun Gong practitioners in Passau. The purpose of the exhibit was to awaken the German people's desire for justice. The practitioners printed postcards for the Mayor and the city council, asking people to pay attention to the situation of Falun Gong practitioners in Liuzhou. The anti-torture exhibition attracted many people. The tragically disastrous scene shocked them all. Many citizens wrote postcards to the Mayor. They also signed the petition to put Jiang Zemin on trial.

Zhao Xianwei, an engineer at a Liuzhou Machinery factory, graduated from the Beijing Forestry University. They locked him up in brainwashing centers, detention centers and prisons many times. The severe torture caused him to develop cirrhosis of the liver. In 2003, he passed away. He was only 28 years old.

Wei Shining used to work in a factory. He sent an article to the Minghui/Clearwisdom website exposing how Guangxi AR's Longquanshan Hospital (a psychiatric hospital) brutally tortured Falun Gong practitioners. Huang Jingchun, a judge for the Beihai City Municipal Court, was forcefully imprisoned in the mental hospital simply because he practiced Falun Gong. Afterwards, Mr. Wei was sentenced to a three-year prison term, and was later forced to leave home and became homeless in order to avoid the persecution.

At the end of their letter, Liuzhou Falun Gong practitioners emphasized, "The dark clouds will not always block the sun. The truth will eventually defeat the evil. When that day comes, we will not forget that far away city, Passau. In the most difficult days, people have offered their selfless help to Liuzhou Falun Gong practitioners and supported and encouraged us."