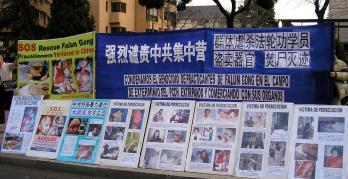 Practitioners in Spain protested the atrocities in Sujiatun and called on the international community to investigate and help stop the persecution. 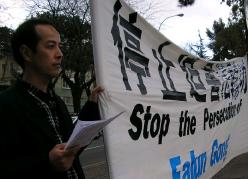 In front of Chinese Embassy, calling for an end of the persecution

The Chinese Embassy is located in a prestigious neighborhood. Passers-by were shocked and indignant at the atrocities at Sujiatun Concentration Camp after seeing the posters, banners and handouts. A gentleman said, "The Communist party's evil reputation is well known. Setting up a concentration camp to brutally persecute Falun Gong practitioners and even harvest body organs from the living is so barbaric. Such brutality must be stopped!" An old lady said after seeing the photos, "God will punish the criminals."

On roads, there were vehicles passing by continuously. Many of them slowed down to watch the banners and posters. Some rolled down window to ask for handouts. Some expressed support with thumbs up or tooting their horns. Even bus drivers slowed down. The drivers and passengers turned their heads towards the posters and banners and showed shock and indignation in their eyes.