On March 27, 2006, practitioners from Malaysia submitted an appeal letter to Prime Minister Abdullah Ahmad Badawi, calling on the Malaysian government to help stop the atrocities that the Chinese Communist regime committed by removing organs from living practitioners' bodies in the secret concentration camp at Sujiatun. On the same day, practitioners also delivered letters to Health Department, Internal Affairs Department and Foreign Affairs Department, to expose the inhuman atrocities at Sujiatun to the administration center of Malaysian government.

In a speech, a Falun Dafa Association spokesman indicated that the chairman of the Political Consulting Committee of China, Jia Qinglin plans to visit Malaysia, and practitioners sincerely hope that the Malaysian government will urge the Chinese Communist regime to dismantle the Sujiatun concentration camp, and all similar camps. 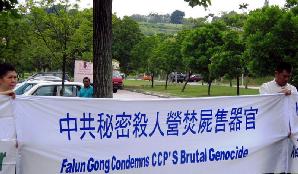 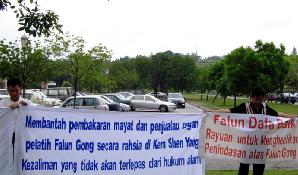 Outside of the Prime Minister's Office Building, practitioners announced a 24 hour hunger strike beginning at 10:00 a.m. on March 29, to strongly condemn the Chinese Communist regime's inhuman atrocities at Sujiatun.

Practitioners also delivered letters to other governmental sections, seeking their attention to this issue. 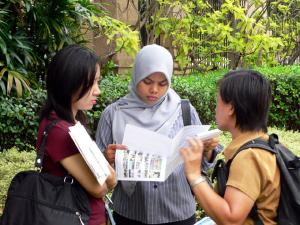 This appeal drew attention from high levels of the Malaysian government. When practitioners went into the building to deliver the letter, many officials from the Prime Minister's Office Building, police authorities and reporters from the government accompanied the practitioners.