The Most Learned Emperor in Chinese History - Emperor Kangxi (Photo) 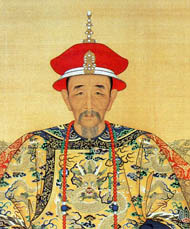 There were three different types of blood flowing in the veins of Emperor Kangxi (1654 - 1722). His father was a Manchurian, his grandmother was a Mongolian, whilst her mother was a Han. He was taught many life experiences by his grandmother, and he then learned the Mongolian language from Sumalagu, horseback riding and archery from a Manchurian master and Confucian education from a Han teacher. Emperor Kangxi's bravery and steadfastness was primarily influenced by his Manchurian culture. His foresight and magnanimous heart were mainly influenced by his Mongolian origin. His benevolence and tactics, on the other hand come from the Han's Confucian education that he received. His openness and heart of seeking endeavors were mainly influenced by Western culture. Emperor Kangxi was imparted with the deep and profound cultures of the Chinese as well as many countries of the West, and this made him one of the most cultured people at that time. All these provided him with a foundation which helped him display his royal abilities and wisdom in many significant events.

Emperor Kangxi was one of the few emperors in Chinese history that loved to read and learn. At the age of 5, he had already been taught to read and write, and since then he studied steadfastly and arduously with full concentration. He also loved to do Chinese calligraphy, and he wrote thousands of words daily as constant practice. When he studied the "Four Books of Confucianism," which consist of the "Great Learning," "The Doctrine of the Mean," "The Analects of Confucius," and "The Mencius," he ensured that he remembered each character of the books by heart. Later he required his sons to read these books over 100 times and to memorize them. This was his scholarly experience when he was young.

After Emperor Kangxi became emperor, he became even more steadfast in his study and sometimes he vomited blood due to prolonged fatigue. To him, studying was not a pastime, but rather it was for him to understand the meaning behind ruling a country. He hoped to learn as much as he could so that China would be in peace and harmony. During his inspection tours around China, he never stopped learning in any situation, whether it was on a boat or in a hotel. Books that he read include "The Book of Changes," "Annals of Zuo," "Documents of the Elder" and "The Book of Odes." He took studying and learning as part and parcel of his life.

Emperor Kangxi was also very particular about historical records, so he ordered his subordinates to compile the "Qing Dynasty Chinese Dictionary," "Kangxi Dictionary," "Gu Jin Tu Shu Ji Cheng," "Tang Poems" and many others. He also wrote many books himself. In total, there were about 1,147 poems compiled during his reign.

Emperor Kangxi was also extremely interested and knowledgeable in medicine. He said that when he was young, he could pull fifteen arrows and shoot thirteen arrows. From this, we can imagine how strong he was and his superb skills in archery. As he had experienced a few major illnesses, he was always interested in medicine. At the age of 40, Emperor Kangxi had malaria and no Chinese medicine could cure him. A Christian by the name of Hong Ruohan and Liu Ying gave him some quinine frost (quinine) which miraculously cured his illness. After his recovery, he rewarded them with two houses in XiAn Gate, and later this place became a Catholic church. When Cao Huang suffered the same illness as Emperor Kangxi, he was also given some quinine frost as a treatment. Since that time, Emperor Kangxi was interested in western medicine and began requiring the capital city to manufacture western medicines. Emperor Kangxi also had a personal laboratory in his palace for manufacturing and inventing drugs. He also encouraged everyone to have vaccinations for smallpox. Some nomads like the Mongolians were especially susceptible and afraid of contracting smallpox. Shun Zhi died because of smallpox, and emperor Kangxi also had smallpox, which left many scars on his face. The Qing Dynasty built some pavilions and magnolia yards at the northern portion of the Great Wall of China, and the main reason for this was to allow Mongolian nobles to continue their pilgrimage without entering the Capital city in China, so as to reduce their chance of contracting smallpox. In order to solve this problem, he ordered compulsory smallpox vaccinations for his family and everyone in the palace. He also promoted smallpox vaccinations to the 49 different tribes of a Mongolian group. This prevented many deaths.

Emperor Kangxi also ordered Christian Ba Duoming to translate the western book, "Human Dissection" into Manchurian and Chinese. He even ordered the dissection of a bear, which he witnessed himself.

Researching natural science was also a favorite of Emperor Kangxi. He started researching natural science because he encountered problems when ruling a country because he did not know any natural science back then. Yang Guangxian, the official in charge of calendar calculation in China at the time, sued Tang Ruowang (a knowledgeable man from Europe who visited China), which started when the Chinese government had a great argument regarding how to calculate the calendar. At that time, Emperor Kangxi ordered the ministers to observe the shadows in the afternoon. However, there was no one who understood how to calculate the calendar at that time, and even Emperor Kangxi did not have the slightest knowledge about it. Kangxi thought to himself, "If I do not know this, how can I judge what is right and wrong?" and at that time, he began to study natural science.

In 1688, Joachim Bouvet, Jean-Francois Gerbillon and four other French scientists were welcomed by Emperor Kangxi in his palace and they offered him thirty different types of imported scientific equipment and books as welcome gifts. These strange pieces of equipment from the West greatly thrilled Emperor Kangxi, and he decided to appoint these scientists as his science consultants in his palace. For the next few decades, the palace was filled with the scientists who did research.

After Joachim Bouvet entered the palace, he was extremely close with emperor Kangxi and many research projects went well. Many of the scientists highly praised emperor Kangxi's good attitude towards science and even wrote their experiences in the palace courts in the report submitted to King Louis XIV. In his book entitled, "Chinese Emperor Kangxi," Joachim Bouvet wrote:

Emperor Kangxi had great enthusiasm towards learning science and every day he would spent a few hours with us. After spending time with us, he would still spend time on self-study. He did not like to live a life wasting time so he always went to sleep late at night. Despite us researchers entering the palace early in the morning, he would always be up earlier than us and had everything prepared. He liked to consult us regarding some questions he had worked on and sometimes he even raised new questions.

At times, emperor Kangxi tried his own methods of calculating distance, the height of the mountains as well as the width of the lake. He set everything up by himself and did everything with precise calculations. After that, he would ask others to calculate the distance and if they had the same answer as his, he would be extremely elated."

In regards to the scientific equipment imported from the West, Joachim Bouvet said, "Emperor Kangxi loved the binoculars, two wall clocks and a leveler -- most of this equipment was made with high precision. All of this equipment was placed in his own chamber. He also liked the straightedge and compass very much."

In 2003, the exhibition, "Emperor Kangxi Exhibition" was held in the Palace of Versailles near Paris, and many types of scientific equipment that was created during Emperor Kangxi's period were all displayed. Amazingly, some of them still looked shiny and functional. The displayed items were as follows:

1. Hand-held calculator: the first hand-held calculator was made in France in 1642 by French scientist Blaise Pascal. The imperial palace kept ten of these ancient calculators and they were all made during Emperor Kangxi's rein. All of these calculators could do simple addition, subtraction, multiplication and division.

2. Gold-plated compass: This was originally invented by Galileo Galilei and could do many different calculations. Kangxi's compass was a further improvised version which had more functions than before.

3. Kangxi's angle rule: It was engraved with four Chinese words which meant "Made by Kangxi."

There were also many other pieces of scientific equipment that were made during that period of time and it was amazing to see the knowledge Emperor Kangxi had.

After Joachim Bouvet and Jean-Francois Gerbillon had left, there were still many scientists who went to the palace in the Capital of China for research purposes. The greatest achievements of these scientists perhaps were being able to encourage emperor Kangxi to build a "China Science Research Institute" as well as implement the huge project of mapping China.

Emperor Kangxi's big project of mapping China has contributed a lot to world geography. It was because of this project that many French scientists had a chance to come to China for investigations, and they had many other gains from this project as well. In 1709, P. Jartoux joined the team in mapping the northeast region of China. At Changbai Mountain, Jartoux saw people harvesting ginseng and was amazed. He documented the function, location, storage methods of the ginseng as well as a picture of the ginseng. Then he sent them to France for publishing. After four years, a French scientist followed Jartoux's descriptions of where to find the ginseng and successfully managed to find other ginseng types on a Canadian Mountain. As this type of ginseng was discovered and grown in the West, it was named "Western Ginseng."