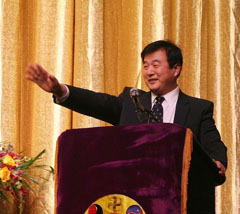 Capable of holding 5,500 people, Madison Square Theatre in Manhattan is one of the famous large theatres in New York. Two large vertical banners reading "Compassion can harmonize heaven and earth as spring, righteous thoughts can save the world's people" were hung on both sides of the stage to encourage practitioners. Master's photo and Falun emblems with the words "Truthfulness, Compassion, Forbearance" and "Falun Forever Rotates" were hung above the stage. Several bouquets of flowers were placed on the stage. In the center of the stage, there was a delicate square table with the golden words "Truthfulness, Compassion, Forbearance" in front of it. Practitioners' speeches on stage could be heard clearly in every corner of the theatre. More than four thousand practitioners listened to the speeches attentively.

Twelve Falun Gong practitioners shared their cultivation experiences, including those from their personal work and life, preparation for the Chinese New Year Gala, truth-clarification in Manhattan, protesting in front of the Chinese embassy or consulate, clarifying the truth about the Nine Commentaries on the Communist Party in the Chinese community, and in media distribution and reporting.

The first speaker was a young Western practitioner who came to New York with his family and settled down in a borough. He started to spread the facts of Falun Gong to the community. Along with his effort, local residents appreciated his principles and elected him as a borough official. Recently he became a father. With concrete actions, he behaved as a Dafa practitioner toward his colleagues and family members and helped them to better understand Falun Gong.

Since last March, a group of practitioners have continued to spread the Nine Commentaries in Chinatown in Flushing, New York. They shared their experiences at the conference. Senior ladies stood in the cold wind for 5 hours every day. A driver delivering the materials got rid of the attachment of fear and strengthened his righteous thoughts. Countless people learned the facts at the site for truth-clarification. Some predestined people sent CDs of the Nine Commentaries to China. When facing interference, some passers-by stepped forward courageously to support the practitioners.

Another Western practitioner shared his experience of moving to New York and participating in media and the Chinese New Year gala. He talked about how to improve from the standpoint of Dafa, and how to stress Dafa in actual tribulations and conflicts between practitioners.

A group of practitioners from New Jersey shared their experience in reenacting torture methods in the cold winter of Manhattan and their xinxing improvement in the process. They especially shared how a fellow practitioner passed a severe test after intensive Fa study and getting rid of attachments.

Some practitioners also shared how they overcame various difficulties in running media for truth-clarification and improved in cultivation in the process of saving sentient beings. Each speaker's cultivation experience won warm applause.

The conference came to a successful conclusion at 5 p.m.