Ireland: Spreading the Truth at the "International Body, Mind and Spirit Exhibition" (Photos)

(Clearwisdom.net) During March 17-19, 2006, the annual Ireland "International Body, Mind and Spirit Exhibition" was held at the biggest exhibition centre in Dublin--Royal Dublin Society (RDS). This year, Irish Falun Gong practitioners were invited to join the exhibition and were offered a free site again. Practitioners seized this opportunity to tell the Irish people about the persecution of Falun Gong and in particular, the crimes of Chinese Communist Party (CCP) in Sujiatun Concentration Camp. In three days' time, Falun Gong practitioners demonstrated the exercises and performed the lotus and umbrella dances. In addition, practitioners further explained to the audience about what Falun Gong is and the persecution which has continued for nearly seven years. They also exposed the most recently exposed CCP crime in a secret state-run death camp - the Sujiatun Concentration Camp, which is reminiscent of Nazi concentration camps from World War II, where Falun Gong practitioners' organs are harvested even while the practitioners are still alive and sold for large profits. 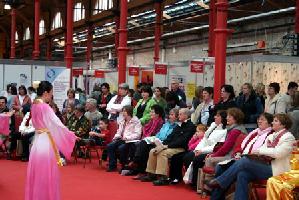 One lady who attended the last exhibition told us that she obtained an exercise instruction video the last time. She has been practising since then and she also teaches the exercises to her relatives. One young man said he used to do the exercises in London. He was very happy to see us here as he can do exercises with other practitioners again.

Many attendees expressed their desire to join the free weekly exercise class in Dublin. People outside Dublin also inquired as to how they could learn the exercises. Practitioners told them that they could download all materials from the Internet for free. Now and then, practitioners will also go to their areas and teach them the exercises in person.

Many Irish citizens were drawn by these five sets of peaceful exercises. Some people took the exercise instruction video so they could learn it at home; some asked for more information about the local instruction session. They all liked this serene and grace practice and many started learning it immediately. When the exhibition was almost over, the organizer came to us to express her gratitude. She thanked us for bringing peacefulness to the exhibition as well as those wonderful performances. We also thanked her for her invitation and support.