(Clearwisdom.net) On March 16, 2006, shocked at the horror of organ removal from live Falun Gong practitioners for huge profits and the corpses being cremated to destroy the evidence inside Sujiatun Concentration Camp, a number of Falun Gong practitioners from Dublin gathered outside of the Chinese Embassy and strongly condemned these atrocities of the Chinese Communist Party (CCP). 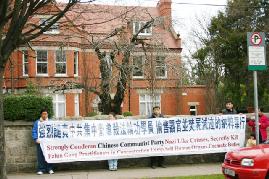 To the Embassy, Madame Wang and Zhou separately spoke through a loudspeaker, "The Announcement published by the World Organization to Investigate the Persecution of Falun Gong regarding investigation of the related persons who have participated in the atrocities of the persecution at Sujiatun Concentration Camp." The solemn and just announcement strongly and clearly expressed Falun Gong practitioners' protest against another inhuman atrocity of the CCP, and at the same time, sternly notified all morally bankrupt police and doctors whose conscience have died, who once participated or are participating in the atrocity: "Immediately stop persecuting Falun Gong and actions of killings in any forms, and meanwhile cooperate with the investigation of the World Organization to Investigate the Persecution of Falun Gong. Good is rewarded with good, and evil with evil. Any crimes in any forms committed against Falun Gong will not escape from the punishment of justice. The only way out for you is to get away from the CCP and disclose the facts."

Yue Xian, a lady from north of Dublin told a reporter: The incident of Sujiatun is another representation the CCP's evil nature, and another testimony of the CCP's lies. On the surface, the CCP wants the international community to admit that it is getting better and delivering itself of human rights. In fact, it has never lessened its persecution of Falun Gong. Instead, it has covertly persecuted Falun Gong practitioners even more madly and hysterically. Simply enough, the incident of SARS is a true portraiture of the CCP's lies. At the same time, Madame Yue appealed to the international community not to be gullible to the CCP's lies any longer. All governments and organizations should immediately condemn the CCP and help stop its persecution of Falun Gong. The practitioners hope that the U.N. will set up a group for a Sujiatun special case, investigate the case immediately, and reveal the results of investigation to the world.