Marvelous Connection to Chinese Culture for an American Couple (Photos)

The world is so vast, and strange things can happen. The couple Yvette Scarlett and Phil Randell got to know Falun Gong - the traditional Chinese culture, not from any Chinese friends, but from priest Baba Ade in downtown Brooklyn, who is also the elder of in an ancient cultivation school that originated in Africa, called Ifa.

According to Yvette, this priest is widely respected among the followers. People know that he seeks truth and is very close to and understands Eastern spiritual beliefs, martial arts, qigong and cultivation. He was a Vietnam War veteran, therefore he had his own special understandings of life and death. When Yvette and Phil married in May 1998 in a small city about 100 miles north of Manhattan, Baba Adei performed the wedding ceremony.

Three years later, in July 2001, the couple vacationed on Long Island and visited priest Ade afterwards. Before they went to see him, Yvette had a dream. In the dream the priest calmly told her, "Come and see me," but he didn't say why. At that time, the couple was facing many issues, such as where to live, where to work, what kind of job to choose, and so on. They wanted to get advice from a wise person. The priest's advice triggered their marvelous connection to Falun Gong.

Yvette was born in Brooklyn, New York. She has a twin sister, and a brother three years older. She lived with her grandparents in Panama until she was five years old and speaks Spanish in addition to English. When she was old enough to go to school, her parents brought her back to the U.S.A and sent her to a private Catholic school.

One summer when she was 11 years old, she went to Panama to see her grandparents. One day, she was lounging on a bench in front of the house. She suddenly felt someone watching her. It was not her grandparents. No one else was around her, but she just perceived someone in another dimension watching and protecting her. Although she did not quite understand this, she didn't feel scared. Since then she realized that she was not alone. When she started to practice the Eastern cultivation from the Buddha school, she completely understood what she felt in Central America when she was just a little girl. It is an unforgettable, subtle feeling.

She initially studied humanities in college but switched to business school and studied business and labor relationships. The Xerox Corporation hired her after graduation where she worked as a sales representative in copier sales. She often asked herself, "There has to be more to life than just going to work, shopping and watching TV. Is this all that life has to offer me?"

Growing up she had held the belief that if one had a good job, was debt free and was able to travel, that would be a good life. She reached that goal but she felt that it was not enough.

She always believed that there should be more to life, but what? She had no answer. Seeing some of her colleagues addicted to drugs or alcohol, she was very depressed. For a long time she didn't want to cook, and often ate for dinner steamed corn with butter. She became very thin. Every day when she returned home she felt confused and often cried.

Later she moved to New York State's capital city, Albany. Although the environment changed, her seeking of spiritual relief became stronger. She described that feeling - to seek for that feeling is just like finding a home, the final destination, and the place where one feels very comfortable. She discovered that the majority of priests and ministers did not put their hearts into their teachings of conventional religions. What they said couldn't fill her emptiness.

For a period of time she studied Latin-American culture, thinking this would fill the void and help her to better understand herself. She went to New York University's Albany Campus, where she earned a Master's degree. She began a Ph.D. program in political science, but quickly discovered that she couldn't find in the books what she was really looking for. Later, she began a career in the health food industry. [Yvette now runs her own sales and marketing business in the health food industry.] She then met her future husband Phil. 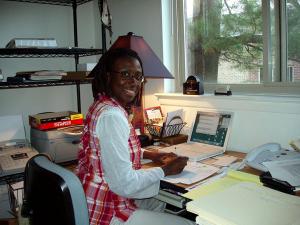 Yvette Scarlett at her office

Phil was born into a reform Jewish family. Phil was not good at sports as a young child and didn't like competition. He knew that someone always loses during a competition and losing always made people unhappy. Therefore, he didn't like it. He liked one North American Indian tribe's tradition in which each participant took a turn winning during sports competitions. By the time he was 15 years old, he was driven by anxiety and depression. During a weekend retreat with his temple youth group, eager to be accepted and fit in with others, he tried marijuana for the first time, unfortunately.

To make sense of his own and other's behavior, when Phil went to college at the State University of New York in Albany and selected a psychology and social welfare as his majors. Nevertheless, he became more addicted to marijuana and alcohol during his studies. This continued until he witnessed the dreadful consequences for some of his schoolmates who had become alcoholics or addicted to drugs, and he stopped completely. In 1983, he graduated and worked as a social worker for three years.

At the end of 1986, he developed severe case of chronic fatigue syndrome, an immune disorder and became too ill to work. Among other symptoms, this caused weakness and insomnia. After five years of gradual decline, Phil realized that he could easily die within a few months if his health continued to degrade. At that point, he put aside his fear of death and began to pray for peace of mind. He believed that the state one is in at death can affect where one goes next. Then a miracle happened. His prayers seemed to work: his life and health began to improve immediately . There is an old Chinese saying, "Happiness follows on the heels of surviving a huge disaster."

When he recovered, he went back to school and earned a graduate certificate in Public Administration. Overlapping with this, he worked for over three years in fundraising for a medical center. He met Yvette in 1994 and they married four years later. Because of his writing talent he became a reporter for a while. He even wrote a science fiction novel that described the story of a group of beings from another world. Facing extinction, these beings reincarnated and came to Earth. They wanted to learn something from Earth and bring this knowledge back to their own world. The fundamental principle of their own society was, "Must pay back what you owe."

When Phil talked about this point, Yvette and I both laughed. Most recently, Phil has worked for the Social Security Administration , a U.S. government agency for several years.

Let's go back to their story. Three years after Yvette and Phil had married, they visited the priest Ade. He gave them much advice. To their complete surprise, the priest said before they left, "I ask you to read these two books after you go back." "It's high level." The priest showed them the covers of the two books, the English versions of Falun Gong and Zhuan Falun. He also gave them some other information and web addresses. This happened in July 2001. 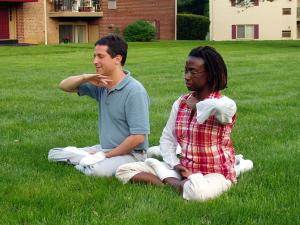 Yvette and Phil practicing the sitting meditation, the fifth set of Falun Gong exercises, in their backyard

The day the ordered books arrived, Phil immediately started reading Zhuan Falun and read 40 pages of 385 the first day. While reading he half-believed and half-doubted. From time to time he commented on the book to Yvette who was busy in the kitchen, "Honey, what it says in this paragraph is really interesting!" He saw the answers to many ancient mysteries he had pondered. But then, he would have doubts. Despite his doubts, that night he suddenly woke up shortly after falling asleep. He felt as if his body was vibrating with energy. One of his hip joints that was out of alignment was automatically adjusted itself recovered. He felt clumps of negative energy being eliminated ejected from his body. At that moment, he saw the image of an Eastern god with six arms above the bed. "This real!" he thought.

The couple started to read the book regularly and practice the exercises. They felt agony, seeing and knowing how the practitioners in China suffer from the savage persecutions. I asked them, considering their background, how they were able to accept such a traditional Chinese cultivation.

Yvette said it was not easy for her to initially understand all this. Because of her Catholic background, she didn't know the terms such as karma, cultivation and reincarnation, and some others. She seemed to have an understanding side and knew if she continued to read and study she would be able to comprehend. Sure enough, she gradually understood, through reading and reading. One day during meditation, Yvette suddenly saw a golden Eastern face approaching her. As she continued to read she began to understand the meaning of salvation and rescuing people.

Let's turn to Phil. After he had practiced for several weeks, he no longer needed to go to the chiropractor he was seeing twice a week. Since the period he had been disabled, he had neck and back problems and had been going to chiropractors for more than 10 years. The neck and back problems completely disappeared after only a few weeks of practicing Falun Gong. More important, the more he reads Zhuan Falun, the more contentment and peace he experiences.

Both Yvette and Phil spend much of their spare time doing volunteer work to help stop the persecution of Falun Gong n China. They do this while doing their best to balance work and family life. They are both grateful for that fateful day they visited the priest who had performed their wedding ceremony.

“Steadily and Righteously Walking the Path of Falun Dafa Cultivation”

“Clarifying the Truth to a Judge in an American Court”