The 554-meter-high Taiping Hill on Hong Kong Island is the best spot for a bird's eye view of Hong Kong, and also a popular tourist site. Every day tens of thousands of tourists come to appreciate the night scene of Hong Kong. Another important focus here is a Truth-clarification Information Center set up by Hong Kong Falun Gong practitioners three years ago after having endured numerous difficulties and pressure. A group of Falun Gong practitioners have been persisting in clarifying the truth every day despite cold winds and hot weather, to the Chinese tourists who can only stay for 15 minutes at this tourist spot.

At the initial stage, practitioners faced trials from all sides. The police often used various excuses to try to not let the practitioners display truth clarification materials. A practitioner whose surname is Zhou recalled the difficulties and trials at the time. Once, a police officer attempted to confiscate the TV set used for playing the truth-clarifying videos, using the excuse that no private materials are allowed to be displayed on state-owned land. A woman practitioner managed to hold the TV set on her shoulder to continue playing the truth-clarifying video for 30 minutes. Many tourists came to watch. The practitioner clarified the truth to the tourists and the police officer. Someone in the crowd said, "If no display is allowed on the ground, then hang it up in the air." The practitioner was inspired and hung the TV set on a pole. The location was even more conspicuous and the tourists could see the TV even better.

At the scenic spot, as soon as they got off the bus, many people were immediately attracted by the truth clarification display boards and facts about Falun Gong. Some asked practitioners secretly, "Does the Minghui website (Chinese version of Clearwisdom.net) still exist? Why haven't I seen it for quite some time?" Some tourists made the Heshi gesture of respect to practitioners. Some tourists asked a tour guide when the bus would come. The tour guide told the tourists, "You just watch the TV here, and I'll tell you when the bus comes."

Every day, practitioners hired a taxi to help transfer the truth clarification materials up the hill in the morning and then back down the hill in the evening. Though there are a lot of difficulties and the practitioners face financial difficulties, they are still persistent. A Western Falun Gong practitioner named Jeff from Washington, DC has been staying in Hong Kong for over a year. He loves Chinese culture and came to this Chinese land. He overcame barriers in the language and lifestyle and different ways of thinking. Though he disliked to pressure others to accept flyers, gradually he assimilated to the Eastern culture. He always smiled and took the initiative to hand out truth clarification materials to tourists. He also joyously hummed a Chinese song urging people to quit the Chinese Communist Party (CCP). One Chinese tourist said, "The CCP is so bad; I've quit and all my family has quit."

Practitioner Zhou said they have been persisting in truth clarification there for over 1,000 days without complaint or regret. They hoped their efforts and kindness will awaken Chinese people's sense of justice and conscience. 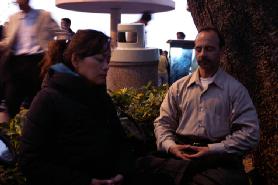