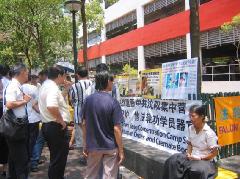 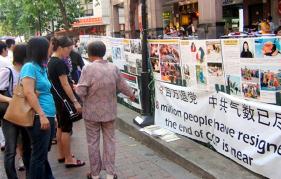 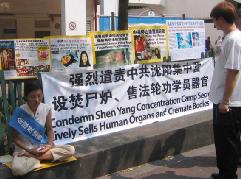 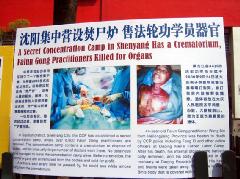 A steady flow of people passed by the Guanyin Temple in the downtown area. Falun Gong practitioner Ms. Cheng stood in front of photo display boards to explain to passersby the CCP's atrocities and passed out truth clarification flyers to help them have a better understanding. Ms. Cheng held a one-day hunger strike to protest the CCP's cruel and outrageous crimes committed against Falun Gong practitioners.

CCP has built a secret concentration camp in Sujiatun, Shenyang City, where more than 6,000 Falun Gong practitioners have been locked up. The secret prison has a crematorium and an unusually large number of doctors. It is reported that no detained practitioners have managed to come out of the camp alive. Before cremation, the practitioners' internal organs are harvested and sold for profit. In the last century, the Nazis massacred more than six million Jews in gas chambers in concentration camps, the Japanese army slaughtered tens of thousands at Nanjing, but we have never heard about the incidents where prisoners have had their internal organs harvested and sold for profit. The CCP's outrageous atrocities are beyond imagination. A Chinese man saw the photo display boards and said, "The CCP is even more brutal and heinous than Japanese soldiers from World War II."

The display boards played an important role in exposing the CCP's atrocities to Singaporeans that have been deceived by the CCP's lies. Many people showed their concern and asked, "What is happening?" After learning about the truth, people expressed their shock and dismay. Ms. Yang watched the photos and said, "A country will be in danger without morality. The CCP is destroying the morality of humanity, and its evil endangers everyone in the world." Mr. He said, "The CCP is brutal, and I wholeheartedly believe that the revelation from the display boards is true. The CCP has done too many evil deeds and will definitely not last much longer."