Osaka, Japan: Practitioners Go on Hunger Strike in Front of the Chinese Consulate to Protest the CCP's Atrocities (Photos)

(Clearwisdom.net) A reliable source recently disclosed that Chinese Communist regime has built a secret concentration camp in Sujiatun, Shenyang City, where at least 6,000 Falun Gong practitioners have been locked up. The secret prison has a crematorium and an usually large number of doctors work there. It is reported that no detainees have managed to come out of the camp alive. Before cremation, the practitioners' internal organs are secretly harvested and sold for profit. 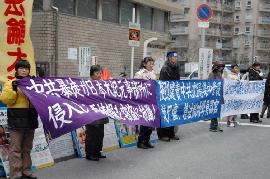 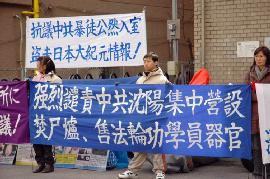 Protesting in the wind and snow

In order to protest the CCP's outrageous crimes, three Falun Gong practitioners in Osaka, Japan started a 24-hour hunger strike in front of the Chinese Consulate. On March 13, 2006, practitioners held a rally and read a protest letter.

The protest letter stated that half a century ago, during Hitler's mass killing of Jews, the victims were poisoned to death in gas chambers and their bodies were then immediately cremated. The crematorium was thereafter a symbol of brutality and barbarity. In the 21st century, the crematorium is again used by the CCP to attack a group of innocent people.

One of the Falun Gong practitioners who were on hunger strike said, "After reading the Nine Commentaries on the Communist Party, I have had some understanding of the CCP's evil nature, but I was very shocked upon hearing this news. The CCP's brutality is beyond imagination. Words fail to express my feeling, and only by staging a hunger strike can I express my protest against the killings."

Participants of the rally expressed their strongest protest through the hunger strike, and at the same time exposed the CCP's atrocities to people from all walks of life in Japan. They called upon all kind-hearted people to join together to hold the CCP accountable for its crimes.

A Chinese man who came to the Chinese Consulate to process his visa read the flyer and said, "I've long know that the CCP is evil, but this is still beyond my imagination." Some passersby said to Falun Gong practitioners, "You should keep it up." Many people were shocked after looking at the banners and learning about the truth, and they found it unimaginable that there is still such a thing happening in today's civilized society.