(Clearwisdom.net) It was very shocking to hear the news that the Chinese Communist regime has built a secret concentration camp in Sujiatun, Shenyang City, where more than 6,000 Falun Gong practitioners have been locked up. At this camp, Falun Gong practitioners' internal organs are harvested and sold for profit. On March 11-12, 2006, Falun Gong practitioners in Philadelphia gathered in front of decorated archway between No. 10 Street and Yaqi Street in Chinatown, condemning the CCP's outrageous atrocities, helping people learn about the truth and calling for an end to the persecution of Falun Gong. 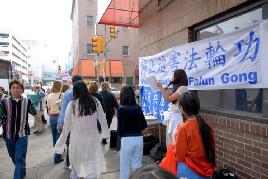 Practitioners expose the CCP's atrocities in Shenyang through a loudspeaker

There were many visitors in Chinatown on Saturday. Passersby were surprised upon hearing about the Chinese Communist regime's inhuman atrocities. They considered it unimaginable that such cruel persecution is still happening in China in modern times. They showed sympathy for the Falun Gong practitioners' suffering in China and condemned the CCP's brutality. Hundreds of flyers were given out within two hours.

At noon on Sunday, it was raining, but the Falun Gong practitioners came to Chinatown as usual. They held up banners, exposed the CCP's heinous crimes to the public and demanded an immediate end to the persecution of innocent Falun Gong practitioners. It happened to be the last day of a flower exhibition in Philadelphia, and many people came to Chinatown, which is nearby the exhibition. They accepted flyers about the CCP's crimes while listening to the practitioners' truth clarification broadcasting. An officer from Philadelphia's Police Department was on duty on No. 10 Street. He said that he had learned about the atrocities and expressed his support for the practitioners.

A Chinese man was very angry upon hearing this tragedy, and he said, "It is too debased to be done by a human being. Heaven will definitely punish this crime!" A young man said, "My whole family has been watching news about Falun Gong, and I knew the self-immolation was a hoax several years ago. It's wrong to persecute good people."

A retired older man from Taishan, Guangdong Province named Mr. Li said that he had known the CCP be the worst 50 years ago. Mr. Li fled from mainland China in 1953. He first went to Hong Kong and then to the United States. Between 1951-1952, he witnessed many CCP atrocities. He said that Falun Gong practitioners, in the face of the CCP's brutality, have been making great efforts to help people know the truth, spread the Nine Commentaries, and promote them quit CCP, and he applauded the practitioners' efforts.

An older Chinese man in his 60's said, "I know the history of the CCP, and I saw through it a long time ago! I have long lost hope in the CCP. China has been totally destroyed by the CCP! When I went back to China to visit my relatives two years ago, a young man in his 20s was beaten to death by police officers in his village. The police refused to let the young man's family to see his body and immediately cremated it."

Many people took the Nine Commentaries so as to gain a deeper understanding of the CCP's evil nature.

“Osaka, Japan: Practitioners Go on Hunger Strike in Front of the Chinese Consulate to Protest the CCP's Atrocities (Photos)”