The Falun Dafa Photo Exhibition that was held from January 21 to February 12, 2006, at Shianglin Elementary School on Alishan Mountain was a great success. It attracted many visitors and viewers, clearly exposing the brutal persecution of the Chinese Communist Regime against Falun Gong while displaying the beauty of Falun Dafa. 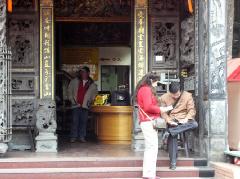 When the practitioners first decided to host the exhibition at Alishan Mountain, they just had a simple thought: Alishan is a busy scenic spot, and tourists from Mainland China must come up to Alishan once they come to Taiwan. Also, the pictures are so good and it's free admission, so it will definitely draw a crowd.

One hundred twenty-six pictures were shipped to Alishan Mountain, and were hung up properly in the square of Shainglin Elementary School. One practitioner said, "We have lots of fog and clouds here, and it's pretty humid, so we covered each photo with plastic sheets, to protect them from getting wet." The practitioner mentioned that even though the equipment is simple, each picture was taken by practitioners from all over the world. So they not only depict the scenes or stories, but also reflect their understanding and the hardships they have endured, making them even more precious and worth studying. 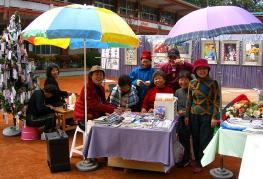 Most of the tourist from Mainland and others would ask curiously about the Christmas tree with all kinds of cards hanging on it. Some of them would compete for the microphone, while others were so shy that they didn't even know what to say when holding up the microphone. The practitioners would lead the shy ones to read a poem from a Falun Dafa book, while others would follow along in reading. Everyone looked so respectful and calm. Once they were given a lotus flower, practitioners would lead them to the pictures. Almost everyone would look at each picture, and the whole exhibition was filled with peace and harmony.

A guide said: "Once the tourists viewed the exhibit, they would be moved by the strong righteous spirit in the pictures. This is what I saw in the past twenty days."

Why is it called "Falun Dafa Photo Exhibition"? These pictures were carefully selected and the content ranges from the founder of Falun Gong giving lectures and practitioners doing exercises in Mainland China in early times, to recent events such as practitioners from Taiwan forming the Falun symbol and events of introducing Dafa and exposing the persecution facts. Each picture has mighty power.

Some were scared when they saw the photos that showed the tortures by the Chinese Communist regime, and some even dared not look at them. The guides would point out that this is a key point of the exhibition. They explained, "Some of the scenes were re-enacted by practitioners and the true situation is hundreds or thousands times worse in the prisons. We just hope people can see the evil nature of the Chinese Communist Party. Over a hundred million people from more than seventy countries benefited from the practice and Falun Gong promotes social morality." People who viewed the exhibition and truly learned the facts would support us and stand up for righteousness. This includes people from Mainland China; they're speechless when standing in front of the pictures. They have benevolence in their heart, the pictures trigger their righteous thoughts, and encourage them to support righteousness. This was the whole purpose for the exhibition.

While at the exhibition, I met a tourist who was a retired government official from Taipei County. He told me that he'd never seen pictures like these before. He said, "The pictures seem to be alive!"

*This Exhibition has moved to National Shianglin Middle School and will be open through April 30, 2006.