(Clearwisdom.net) The CCP has set up a Nazi-style secret concentration camp in Sujiatun, Shenyang City where more than 6,000 Falun Gong practitioners have been locked up. It is reported that no detainees have ever come out alive. Practitioners internal organs are harvested for profit and their murdered bodies cremated to destroy the evidence. The secret prison has a crematorium from which white smoke is often seen rising.

Since the appalling news about Sujiatun Concentration Camp was disclosed on Clearwisdom.net on March 8, 2006, people from all walks of life are shocked and indignant. Practitioners in Los Angeles protested in front of the Chinese Consulate on March 11, 2006. They condemned the CCP's heinous crimes and called upon the international community to investigate and immediately stop the atrocities at Sujiatun and elsewhere. 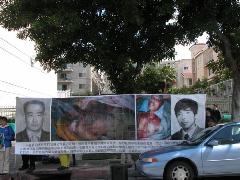 The corpses of some Falun Gong practitioners tortured by the CCP reveal blood-filled holes, surgical incisions and evidence of organ removal. The outside world shows great concern. Photos of Liu Yufeng, who was beaten to death, and Wang Bin from Heilongjiang Province who was beaten to death at Daqing Men's Forced Labor Camp, are good examples. Wang Bin's internal organs were harvested and his body was placed in the mortuary at Daqing People's Hospital. 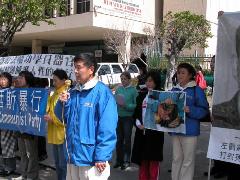 Spokesperson Li Youfu condemned the CCP's inhuman crimes, calling them intolerable and a disgrace to the Chinese people and humanity. He called upon all people with a sense of justice to stand up to condemn the evildoers, and expose their insidious crimes. He also called for people to recognize the CCP's true nature and not to ally themselves with the CCP. 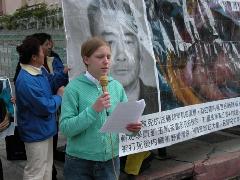 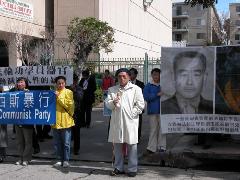 The Chief editor of China Affairs Magazine, Wu Fan, has personally experienced CCP tyranny. Several days ago, he joined a global relay hunger strike in front of the Chinese Consulate. Mr. Wu Fan was shocked at the news of the Sujiatun concentration camp. He said, "Big events are constantly occurring in China. We are urged to express our position in these things. The CCP has done such inhuman things that we have to protest." Mr. Wu Fan continued his speech, "We see you torture and murder Falun Gong practitioners in secret Sujiatun Concentration Camp and sell internal organs of victims of murder. This is animal behavior. I want to ask, 'Are you still human?' I pray for Heaven and gods to bring justice to you, people who are worse than animals. You must be held accountable, otherwise China will be finished! All people with a sense of justice will be shocked at the incident! We mentioned this incident to a friend in mainland China on the phone yesterday. He was very much appalled. He said he would go to investigate. But some people are still passive. If we allow such heinous and outrageous crimes to run rampant, it will destroy China. We should be clear that so long as the CCP regime exists for one day, CCP is destroying China, and destroying the world!" He called upon the world community to stand up to condemn the CCP. 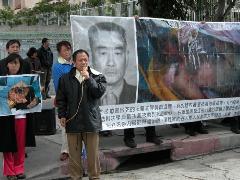 Secretary-general of China Social Democratic Party Mr. Liu Yinquan also condemned Sujiatun. He stated that the appalling barbaric crime is another "lunatic atrocity of the CCP." The CCP has been totally inhuman, and it can do anything evil. He especially called upon business people who trade with the CCP, "to not ally themselves with the scoundrel CCP for a small bit of profit, and to not assist the CCP in doing its evil deeds." He plead the developed countries including the USA to work together to punish the CCP, and he also plead all people with a sense of justice to jointly condemn the CCP, stop the CCP's outrageous crimes and put an end to its tyranny as soon as possible.

A representative of California's Los Angeles "Service Center for Quitting CCP" expressed that the information revealed about Sujiatun shows how the malevolent CCP is an evil specter. Its aim is to destroy humanity. It is outrageous, barbaric and constantly kills people. Quitting the CCP and its affiliated organizations is a way that every person with a sense of conscience can use to protest the atrocities and choose a better future for themselves. She hopes everyone can help spread the Nine Commentaries and support the three withdrawals from the CCP and its affiliated organizations. 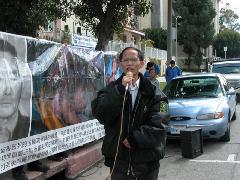 Poet Jiang Pinchao came once again to join the protest. He said, "I come here today to express my respect to Falun Gong practitioners for their courage and valiance and mourn for Falun Gong practitioners who have been tortured to death in mainland China for persisting in their belief. They have suffered the most severe persecution because the evil is afraid of them the most. On the other hand, I once again strongly condemn CCP's inhuman secret massacre!" He called upon people to completely abandon their illusions about the CCP. The revelation of the secret Sujiatun Concentration Camp once again proves the CCP's demonic nature. He especially called upon the international community to pay attention to and investigate the secret Sujiatun Concentration Camp and bring all murderers to justice. He finally called upon people not to give up their conscience and cave in to the CCP for the sake of economic profits. 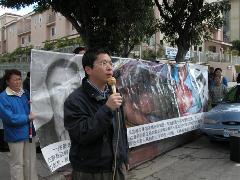 Practitioner Wu Yingnian said, "The revelation about Sujiatun shows the CCP's persistent character against humanity. The forced labor camps where it locks up Falun Gong practitioners were the same places it detained the rightists (in the Great Cultural Revolution). They are reusing the labor camps now and even creating Nazi-style concentration camps." He condemned the CCP's crimes against humanity, and called upon the international community to conduct an immediate investigation and stop the CCP's atrocities.

He said that since the CCP started the persecution of Falun Gong in 1999, at least ten thousand Falun Gong practitioners have been arrested and locked up in forced labor camps, and mental hospitals. Countless practitioners have been abducted for brainwashing. Over half of them are women. They are wives, daughters, and mothers. They have been subjected to inhuman tortures, such as electric baton shock that disfigured their faces, and sexual harassment and abuses. He finally said, "Just like the Nazis disgrace Germany, the CCP disgraces the Chinese people. In fact, today, the existence of the CCP is a disgrace to the people of the entire world, a disgrace to humanity." He called upon people to give up their illusions about the CCP and stand up to defend justice and truth.