(Clearwisdom.net) The Chinese Communist regime has built a secret concentration camp at Sujiatun in Shenyang City where at least 6,000 Falun Gong practitioners have been locked up. Their internal organs are harvested and sold for profit, and their murdered bodies are cremated to destroy the evidence. The news shocks everyone that hears it. At noon on March 11, 2006, people from different social groups in San Francisco rallied at "Garden Corner" in Chinatown to protest the CCP's Nazi-style genocide and to call for an urgent rescue of Falun Gong practitioners suffering persecution in China.

The coordinators of the rally described their feelings as heavy and grieved. Wu Junxiang expressed that he had heard about some people in Taiwan organizing groups traveling to China to receive organ transplants. Transplants require that the transplanted organs are healthy and alive. Blood types and other conditions must be consistent. He often wondered where so many healthy transplantable organs came from. 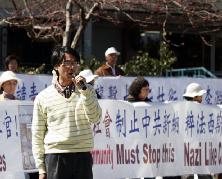 Wu said that he now knows where the organs come from. The CCP persecutes practitioners for their belief, tortures and kills them, and even goes so far as to harvest their organs for profit. He asked everyone to ask themselves, what if one of the victims was their own relative? What would they think of this then? He expressed his belief that all atrocities the CCP has committed will soon be exposed to the public. He asks those who still support the CCP if they are ready to face the gruesome truth.

Do not allow Nazi Fascism to revive in China 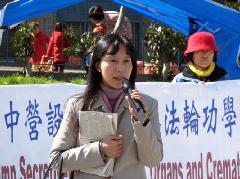 Ms. Li Hanwen, director of the Silicon Valley Branch of the Global Alliance for Democracy and Peace expressed that she heard about the inhuman and appalling news two days ago, and she did not dare to believe it. "How could such a horrible and inhuman thing happen in the 21st century? This is truly evil, the work of demons. This kind of thing enrages democratic countries and people." She called upon the international community to take this incident seriously, and not allow the horrors of the Nazi holocaust to be repeated in China.

We should stop the terrorist acts in the concentration camp 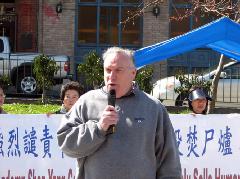 Expert on China issues researcher and writer Roger Canfield expressed that he was honored to be able to attend the rally that opposes the CCP's evil deeds. He said concentration camps are a form of terrorism that should long ago have been eliminated, but the CCP still employs them today. He expressed that we should stop the violence and killing immediately.

CCP's inhuman atrocities are intolerable and unpardonable by Heaven's law 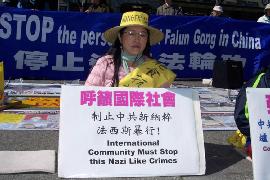 Falun Gong practitioner Zhang Hong from the Bay Area started a hunger strike the day of the event. She said, "As a Falun Gong practitioner, I should stand up to tell the world's people about the CCP's inhuman and outrageous crimes. They persecute these good people who cultivate Truthfulness-Compassion-Forbearance."

Zhang Hong continued that the brother of a Bay Area computer engineer, Hu Zhiming, was arrested by Beijing National Security agents in 2005 and then disappeared. His whereabouts remain unknown. His Bay Area brother, Hu Zhihua, has been calling for help to rescue his brother. The protest hunger strike is to call upon kind-hearted people from around the world to pay close attention to and stop the genocide in China, and at the same time to urge the CCP to immediately release all Falun Gong practitioners.

Recognize the CCP's bloodthirsty nature and break away from it

Local practitioner Cheng Minghua related several facts verified through investigation that confirmef that the CCP tortured and killed Falun Gong practitioners and removed their internal organs for profit. Many people can't believe the grisly truth of what is happening at Sujiatun concentration camp, thinking that such an atrocity couldn't happen today. But the truth is, Jiang Zemin ordered in 1999 that beating Falun Gong practitioners to death would be "counted as suicide," and ordered subordinates to "cremate their bodies directly." She hoped everyone would read the Nine Commentaries on the Communist Party and learn about the CCP's bloodthirsty and murderous nature.

A representative of the North California Service Center to Quit the CCP, Ma Zhiyou, explained that almost 9 million people have quit the CCP and its affiliated organizations. The more wicked the CCP is, the easier for people to see clearly its nature, and more and more people therefore will not acknowledge it and will break away from it.

The last-ditch struggle of the CCP before its demise

Zhan Qing pointed out that we have no idea if other places in China also have such concentration camps. War criminals from the Nazi concentration camps of WWII have been brought to justice and held accountable for their crimes. Their disgrace will forever be recorded in history. The righteous will ultimately prevail, so we call upon those who still work for the CCP, both inside and outside China, to be brave enough to tell the truth and stop the atrocities from continuing.