London, UK: Practitioners Explain the Facts and Expose the CCP's Wickedness on the Streets (Photos)

(Clearwisdom.net) On March 11, 2006, Saturday, Falun Gong practitioners in London came to the Hammersmith business area in West London to explain the facts about Falun Gong and to expose the CCP's brutal persecution of practitioners. They expressed support for the over 8 million people who renounced the CCP. 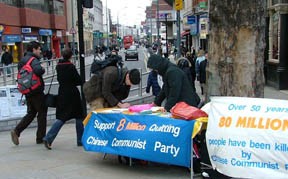 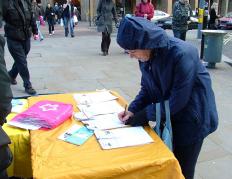 In March, it is still very cold in London. The practitioners came to the front of the shopping center in Hammersmith Subway Station and set up an information table and posters, exposing the CCP's brutal persecution of Falun Gong and trampling of human rights. They explained to passersby about the CCP's inhuman persecution against Falun Gong practitioners who follow Truthfulness, Compassion, Forbearance. They also unfurled banners to support the over 8 million Chinese people who have renounced the CCP and its related organizations.

“Washington DC: People from Different Walks of Life Protest Against the Atrocities in Sujiatun Concentration Camp in Front of Chinese Embassy (Photos)”