(Clearwisdom.net) On the evening of March 9, 2006, dozens of San Francisco practitioners continued their hunger strike to protest the inhumane barbarity of the secret Sujiatun Concentration Camp and to call on the international community to take urgent actions to investigate the camp and stop the killing.

During the day, the weather suddenly became very cold and it was very chilly by evening with an icy rain on and off. Practitioner Charles Lee started his protest that morning. He said, "The existence of the secret Sujiatun Concentration Camp, with a crematorium inside the camp, plus its trading of practitioners' organs, tell us how far the Chinese Communist Party (CCP) can go against humanity. It is totally inhumane! All this is just evil! Of course, the Nine Commentaries on the Communist Party pointed out a long time ago that the CCP is just an evil specter." 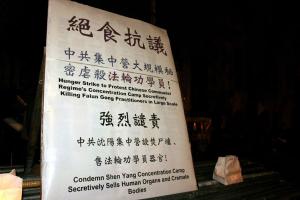 Charles said, "The secret Sujiantun Concentration Camp is an example of the CCP's state terrorism. After taking control over all state resources, its persecution against the general public is an omnipresent terror. Such terror can distort and diminish the human conscience. Such terror has erased police officers' conscience and forced them to serve as hatchet men in concentration camps. Such terror has also made the public helpless under the CCP.

After a one-day hunger strike, Charles said that he remembered his and many others' persecution experience in China and he was very worried. Charles called on the international community to immediately investigate the secret Sujiantun Concentration Camp and to stop the inhumane treatment of practitioners. He also hoped the Chinese people will soon see through the nature of the CCP and end its tyranny.

Practitioners pointed out that the personnel of the Sujiantun Concentration Camp will face the same fate as those of the Nazi concentration camps. When the time comes, they will be spurned by the whole world and face judicial punishment.