(Clearwisdom.net) Around noon on Feb. 8, 2006, CCP agents broke into Falun Gong practitioner Dr. Li Yuan's home and brutally beat him. Armed with guns, they pried open Dr. Li's file cabinets, stole his laptops but left other valuables alone. Such an irrational crime in a free country has exposed the CCP's unscrupulousness in its death throes. 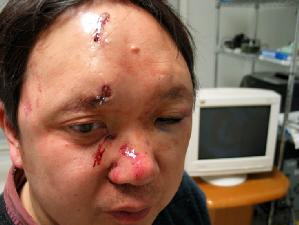 Dr. Li Yuan with 15 stitches for the wounds on his face after being beaten by gunmen in his own home on Feb. 8

The CCP agents covered him with a bed quilt until he was almost suffocated. Then they took off the quilt and started beating him, especially in the temple area. They used the tape they brought with them to tape his mouth, eyes and ears. Dr. Li's arms were tied behind his back and his legs were also tied up. He couldn't move at all, nor could he see or shout.

One of the men asked Dr. Li in Mandarin, "Where is your safe?" They searched upstairs and downstairs for about half an hour, took away two laptops, pried open two file cabinets, but left other valuables alone. Dr. Li's neighbor called the police after the intruders had left. Dr. Li was taken to a hospital by ambulance and received 15 stitches on his face. 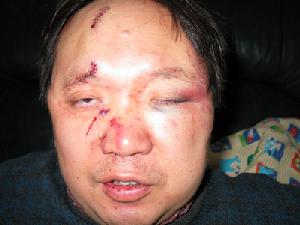 Dr. Li Yuan with 15 stitches for the wounds on his face after being beaten by gunmen in his own home on Feb. 8

The Course of the Attack

Li Yuan said, "Around noon, someone rang the doorbell. I looked through the peephole and saw an Asian man in his 30s, and I opened the door. The man told me that he was there to deliver water. I said I did not order any water and asked if he made a mistake. While I was talking, another man appeared from around the corner. The two forced themselves into the apartment. One of them pulled out a dagger, the other, a gun. And they ordered me not to move.

"I started yelling for help and tried to run away. They covered me with a bed quilt until I was almost suffocated. 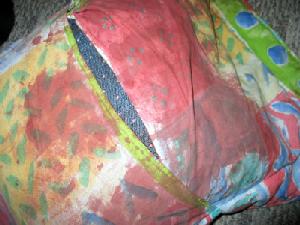 The thugs covered Li Yuan with a bed quilt until he was almost suffocated. They beat him on the temple area. The blood on the quilt is a result of the beating.

"Then they took off the bed quilt and started beating me, especially in the temple area; they probably beat me with the gun handle, and I bled profusely. Finally they used the tape they brought with them to tape my mouth, my eyes and my ears; my arms were tied behind my back and my legs were also tied up. I couldn't move at all; I could neither see nor scream.

"The first two men spoke Korean, which I don't understand. From what I could tell, another two men came in [later]. One of them knew Mandarin, as he asked me in Chinese, "Where is your safe?" He probably doesn't speak English. They searched upstairs and downstairs several times and left about half an hour later."

Dr. Li slowly freed himself from the electric cord that tied his legs and found his way to the street. His neighbor saw him and called the police. The police examined Dr. Li's apartment with him. They discovered that two of his file cabinets were pried open. Two of his laptop computers were taken away, but more expensive items, such as cameras, were not.

The area where Dr. Li lives is very safe. The police and the paramedics all said they had never seen anything like this happening here before and were very surprised.

Truth-Clarification Is the CCP's Worst Fear 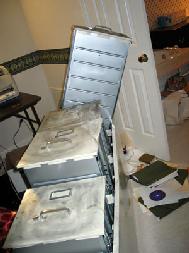 Dr. Li Yuan is Chief Technical Officer of the Epoch Times. One of the agents asked Dr. Li in Mandarin, "Where is your safe?" They searched Dr. Li's house, took away two laptops and pried open two file cabinets. It is unknown what documents they took away.

The CCP has been exhausting China's national resources to carry out the brutal persecution of Falun Gong over the past six years. However, Falun Gong practitioners, who follow the principle of Truth, Compassion, Forbearance, don't give up. On the contrary, the CCP has been stepping closer to its doom with its lies and violence. The last day of this evil party will come soon as the true story of Falun Gong is widely spread and Nine Commentaries on the Communist Party triggers a flood tide of withdrawals from the CCP. This frenzied crime by the CCP's hired agents in a land of freedom has exposed the CCP's unscrupulousness in its last days.

Li Yuan said, "The Chinese communist regime...has targeted me with such a plan. The brutality of the way they beat me and the time chosen to do so clearly shows that this is an irrational warning and act of revenge. But they have gotten it wrong: My computers are highly encrypted. Nor will I be scared by this kind of petty trick. I will continue to expose the evil of the Chinese communist regime as I always have, telling its crimes to the people of the world."

Li Yuan also reminded his fellow Falun Gong practitioners overseas to have a stronger sense of security and to prevent the malicious CCP agents from causing any damage by taking advantage of our loopholes.

On hearing of this incident, overseas Falun Gong practitioners expressed their determination to expose the CCP's crimes widely to let more people see the vileness of the evil party. The CCP's use of criminals cannot extend its life, but will only end up hastening its destruction.