Since the end of December 2005, Malaysian practitioners have been peacefully protesting in front of the Chinese Embassy every day. Every morning and evening they practice the Falun Gong exercises and send righteous thoughts to peacefully protest the ongoing brutality and call the public's attention to it. 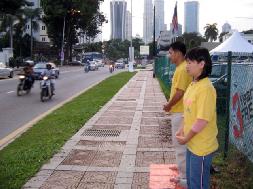 Once, the Chinese Ambassador's limousine passed by while practitioners were sending righteous thoughts. Staff members of the Embassy requested that police officers disperse the practitioners. The officers said that the practitioners didn't violate any laws and protesting was their right, and refused to do so.

When they learned that the practitioners' protest has been consistently peaceful and rational, the police authorities were moved by their uncompromising spirit.

Some police officers were concerned for the practitioners' health, as they often protested in rainy weather. Every day many drivers of passing vehicles would sound their horns or raise their thumbs to encourage the practitioners and express their support.