(Clearwisdom.net) On February 15, Ankara practitioners were invited by KANAL-D, one of the largest Turkish private TV stations, to introduce Falun Gong and talk about the persecution in China on their live 8:30 morning news. 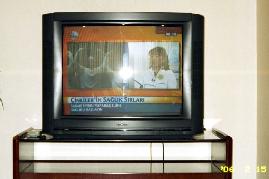 On February 9, Turkish practitioners from Mersin and Ankara jointly clarified the truth to congress, TV stations and newspapers. Consequently, the KANAL-D TV station invited practitioners to the morning news program on February 15.

During the program, practitioners spent ten minutes introducing Falun Gong: The practice originates from an ancient cultivation base and guides practitioners to cultivate mind nature (xinxing) with the principles of "Truthfulness, Compassion, Forbearance." In addition, Falun Gong has five sets of exercises. Cultivation of Falun Gong with both the xinxing and exercises can bring profound benefits to one's mind and body. Falun Gong is now practiced in around 80 countries. In Turkey, one can learn Falun Gong in many major cities' parks, and practitioners offer free instruction.

At the same time, several practitioners demonstrated the exercises. Following the demo, they talked about the ongoing persecution of Falun Gong and the severe human rights violation in China by the totalitarian communist regime.

The program host said that he hoped every Turkish person would practice Falun Gong and have a healthy body. Immediately after the News, the TV station received many phone inquiries about Falun Gong.