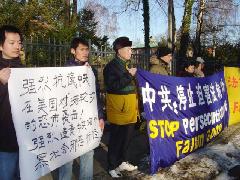 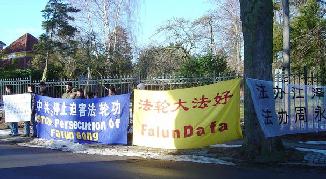 (Clearwisdom.net) On February 11th, practitioners gathered in front of the Chinese Embassy in Copenhagen to protest the vicious attack on American Falun Gong practitioner, Dr. Li Yuan. Thugs also broke the door of the key person in charge of NTDTV in France, to steal money.

8 million people have recently withdrawn from the CCP and the human rights movement has become more and more popular in China. The CCP is on the verge of becoming extinct. Everything it does has no effect except helping more people understand its evil nature.

On February 8th, the Falun Gong practitioner, Dr. Li Yuan was attacked, tied up, and beaten by pistol-bearing CCP agents in his Atlanta home. Two laptops and documents were stolen. His neighbor reported the attack to the police. Mr. Li Yuan was rushed to the hospital by ambulance and given 15 stitches.

On February 9th in Paris, the house of Epoch Times volunteer Ms. Chen, in charge of the NTDTV gala, was broken by Chinese Communist secret agents. The wardrobe door in the bedroom was dismantled and bent, the bed was overturned, clothes and other goods were routed in great confusion. The NTDTV ticket money, which was put in the box in the living room, was all taken away, but the tickets and checks were left. The valuable jewelry was also taken away. All materials in the living room were thrown on the ground. 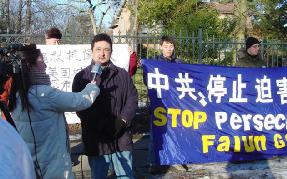 “Citizen of Slovakia: "The things you're doing are very good. Please continue" (Photos)”