Falun Dafa has spread widely throughout the United Kingdom:

Falun Dafa was first introduced to the public in China in 1992 and has now spread to eighty countries. Falun Dafa practitioners, both Chinese and English, are seen all around the UK, from London to Scotland. They are attracted by the principles of "Truthfulness-Compassion-Forbearance" and discipline themselves according to these principles. Whatever happens, they always consider others, put others first and try their best to become altruistic. By doing the five sets of exercises every day, these people gain benefits in both body and mind. Gradually, more and more people are taking up the practice.

Currently there are about forty exercise classes in twenty-eight cities all over the UK. All exercise sites are organized by local practitioners. All classes are free of charge and run by volunteers. People who are interested can come and go freely since there are no name lists or forms. 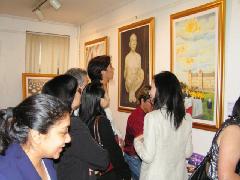 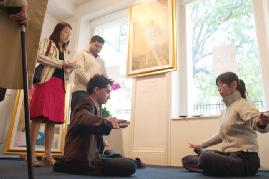 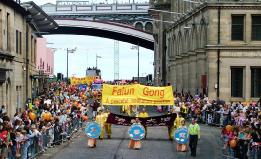 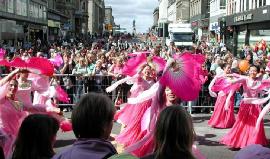 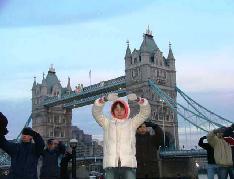 Demonstrating the Falun Gong exercises in front of London City Hall. The London Tower Bridge is in the background.

Public Activities to Raise Awareness of the Persecution in China

Since the Chinese Communist Regime and Jiang Zemin colluded to persecute Falun Gong in July 1999, at least 6,000 Falun Gong practitioners have been illegally sentenced and hundreds of thousands of people have been unlawfully detained in labour camps. Thousands of healthy people have been put into mental hospitals and tortured with intravenous drugs that destroy the central nervous system. Countless practitioners have been kidnapped and imprisoned in local "brainwashing classes;" many have been not only subject to mental torture, but also physical abuse and extortion. 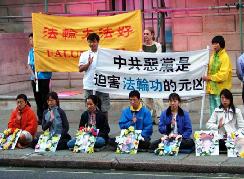 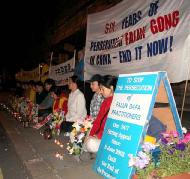 Peaceful appeal in front of the Chinese Embassy in London 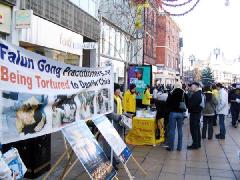 In 2001, an SOS walk for the urgent rescue of Chinese Falun Gong practitioners was an important step in UK Falun Gong practitioners' efforts to stop the persecution. Practitioners walked across three European countries (a total of 386 miles), from Birmingham to London (120 miles), from Edinburgh to London (450 miles), and from London to Brussels in Belgium. The practitioners walked almost 1,000 miles in total. As they walked, they distributed information and letters of appeal to many people, including the media and government. Because of the wide media coverage, many people got the chance to find out about how the Chinese Communist Party (CCP) persecutes Falun Gong.

On June 5th 2002, practitioners started a twenty four hour vigil outside the Chinese Embassy in London to peacefully protest and appeal for an end to the persecution. This has been going on for three and half years now. In all seasons, no matter how hot or cold, practitioners have never stopped the appeal. Citizens in the neighborhood have showed their support by bringing drinks to practitioners, cars driving past will beep to show their support and numerous passersby have accepted information materials and read them carefully.

Nearly every weekend and holiday, Falun Gong practitioners give up their free time and use their extra money to print truth-clarifying materials and travel to activities. They go to streets, tourist spots, downtown areas etc. to expose the truth of the persecution to Chinese and English people alike. They tell people what Falun Gong is and what the persecution is. They also call on people to express concern for human rights and for help to end the persecution.

UK practitioners have been holding anti-torture exhibitions for the last few years. They use pictures and real people to simulate how the CCP tortures Falun Gong practitioners. In this way, those inhuman torture methods used in the labour camps and brainwashing classes are exposed in front of the world's people. Wherever the anti-torture exhibitions were held, people were shocked and lined up to sign petitions to stop the persecution.

During the past several years, Falun Gong practitioners have participated in many UK parades, displaying Chinese waist drumming, traditional Chinese dancing and beautiful floats. Both the beauty and the spirit of Chinese traditional culture has been shown to people in the UK. The Falun Gong entry won top prizes four times consecutively in the annual Edinburgh Art Festival. Practitioners were also invited to participate in a New Year Parade in London. During the Oxford mayor's inauguration parade, practitioners sent their heart-felt wishes to local residents and tourists by performing Falun Dafa music and singing "Falun Dafa is Good."

The CCP is still spreading lies and persecuting Falun Gong practitioners brutally in Mainland China. In the light of this, Falun Gong practitioners in the UK will keep exposing this persecution using every possible peaceful method. We will continue strongly calling for help from the righteous Chinese people and the international community until the persecution is finally stopped.

“The Story Behind a CCP Denunciation”