On February 10, Canadian Falun Gong practitioners, staff members of the Epoch Times in Ottawa and other local Chinese people rallied in front of the Chinese Embassy to protest the most recent violence of the Chinese Communist Party (CCP). According to Clearwisdom.net, on February 8, Dr. Yuan Li, a Falun Gong practitioner and the chief Technical Officer of the Epoch Times was assaulted by armed CCP agents at his own home. Dr. Li was brutally beaten and the wounds on his face required 15 stitches. Two laptops and some documents were stolen. 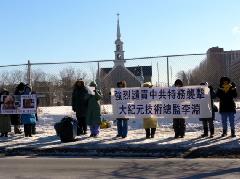 Protest in front of the Chinese Embassy

In a statement, Qihua Xin, the Epoch Times Ottawa chief, said: The Chinese Communist Party is exporting its gangster methods overseas, and thousands of CCP secret agents have already become a huge threat to the safety of overseas Chinese. The assault of Dr. Yuan Li by armed CCP operatives is one good example. Facing the trampling of civilization by an evil regime, we cannot remain indifferent.

Qihua Xin pointed out that the CCP advocates violence and lies and persecutes righteous people. As the Nine Commentaries on the Communist Party is widely spreading, nearly 8 million Chinese have formally quit the party. Knowing its tyrannical rule is approaching its end, the regime has become totally irrational and is using all measures to persecute unarmed people. To persecute people who dare to speak out, the regime has colluded with criminal underworld organizations and resorted to despicable violent measures.

The statement stressed: To tolerate crimes is to trample civilization. We hope that all people with a sense of justice will condemn the CCP's terrorism and its collusion with the underworld.

Canadian Falun Dafa Association Chairman Xun Li said, "We strongly protest the CCP for assaulting practitioner Yuan Li. We condemn the CCP for using underworld measures to persecute peaceful and kind Chinese. We hope all kindhearted people will work together to end the omnipresent terrorism of the CCP."