(Clearwisdom.net) According to reliable news, former Chinese Minister of Education Chen Zhili is going to visit Canada. Because during her term as Minister of Education, Chen Zhili actively carried out Jiang's policy of persecuting Falun Gong in the educational system, she is suspected of committing genocide and other crimes against humanity. The Canada Falun Dafa Association has requested the Canadian government to deny entry to Chen Zhili, but if Chen enters Canada, Falun Gong practitioners will immediately take legal action against her. 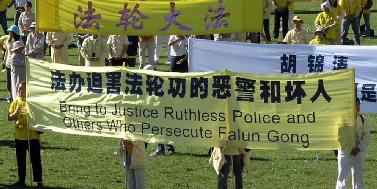 On September 9, 2005, Canadian Falun Gong practitioners called for severe punishment of those who have been involved in the persecution of Falun Gong outside Parliament Hill

The report states that, taking advantage of her special relationship with Jiang Zemin and the power derived from it, Chen was responsible for a vicious persecution, affecting people throughout the educational system. Chen Zhili organized many anti-Falun Gong conferences to advance the persecution against Falun Gong. She issued documents in the name of the Education Ministry to launch a Cultural Revolution-style campaign to force teachers and students in universities, high schools and elementary schools to declare their stance on Falun Gong, and no one was excepted. She forced teachers and students to watch films slandering and attacking Falun Gong, and conducted the anti-Falun Gong "Million Signatures" campaign to coerce students to take part in a persecution that was initiated by a handful of people. She ordered anti-Falun Gong contents to be inserted in textbooks and written exams in primary schools and high schools--even in college entrance exams and graduate entrance exams--and included programs framing Falun Gong broadcasted on CCTV and other media outlets into the curricula of colleges and universities to indoctrinate and incite hatred in the future teachers' group, so as to achieve the goal of long-term mental control over them.

According to preliminary statistics, as of January 29, 2006, among Falun Gong practitioners who have died from persecution published on Minghui Net website, 150 were teachers and students, and the torture death cases covered all of China.

Chen Zhili was sued when visiting the African country of Tanzania on July 30, 2004. Chen was charged with "employing torture and extra judicial killing against Falun Gong in the circle of education in China." Chen Zhili was summoned to appear in court on July 19 in Tanzania. (Please see "State Councilor and Former Education Minister Chen Zhili Sued in Africa and Appears in Court (Photo)" at http://www.clearwisdom.net/emh/articles/2004/8/1/50915.html)

President of the Canadian Falun Dafa Association Li Xun said in an interview that they will request action from "Canada's Crimes against Humanity and War Crimes Program" composed of the Canadian Immigration Department, the Royal Canadian Mounted police and officials from the Department of Justice, to intervene with related departments and refuse to issue an entry visa to Chen Zhili, thus preventing her from entering Canada. Li Xun said that the request was proposed on the basis of Canada's Crimes Against Humanity and War Crimes Program and Canada's implementation of international law concerning these issues.

It is reported that the Falun Dafa Association once requested to deny entry into Canada to two other Chinese Communist Party officials, Bo Xilai and Xia Deren, who are deeply involved in the persecution of Falun Gong, in September 2005. Bo and Xia did not make the trip as scheduled. In October, the governor of Guangdong Province, Huang Huahua, was sued after entering Canada and served with a court summons.

“Central News Agency: Ontario Human Rights Tribunal in Canada Rules that it is Illegal to Discriminate against Falun Gong Practitioners”