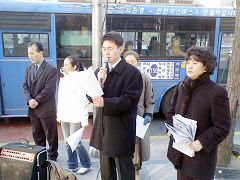 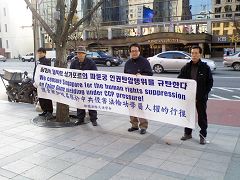 The press conference scheduled for 2:00 p.m. was delayed for one and a half hours due to interference by the embassy's security staff. The temperature also suddenly dropped to below zero. Practitioners overcame the obstacles, persisted in holding the activity, and read the statement. The statement condemns the Singapore court for ignoring facts and making an unfair verdict against two Falun Gong practitioners who peacefully protested outside the Chinese Embassy in Singapore. The two practitioners were forced into prisons. All Korean Falun Gong practitioners strongly demand the Singapore government to immediately withdraw this wrong verdict and no longer act as an accomplice to the wicked CCP.

When the activity was over, practitioners delivered the statement to the Singapore Embassy staff.