(Clearwisdom.net) On the afternoon of December 24, 2006, Falun Gong practitioners from Auckland participated in a Christmas parade in Waipu Town, north of Auckland. 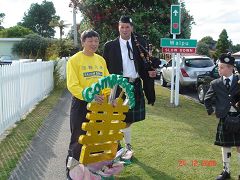 After the practitioners arrived at Waipu, they walked to the assembly area of the parade in small groups of two or three. Two practitioners, each carrying a large Chinese character, one "Shan" and the other "Ren," were stopped by a Westerner with a bagpipe. He pointed to the two characters and asked where they came from and what they meant.

The bagpipe player said, "Thank you for telling me this. Falun Dafa is truly great. I am from the Scottish Bagpipe team. We have over 30 people joining the parade. Thank you."