(Clearwisdom.net) Falun Dafa Practitioner Wang Huachen was acknowledged as an excellent worker at Huludao City's Jinhua Chemical Group PVC/VCM Corporation. At 4 p.m., November 17, 2000, he was captured at his workplace and taken to the Political Security section of Lianshan District Police Station, Huludao City. 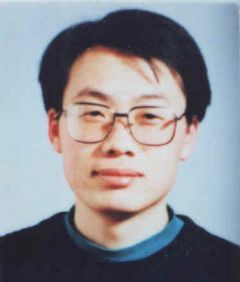 On the fourth floor of the Political Security Brigade, four police took off Wang Huachen's shirt, lowered his pants below his knees, and cuffed his hands behind his back. The police then brutally beat him with wooden sticks and "wolf fang" sticks [a rubber baton covered in spikes, weighted with lead. Its use damages internal organs but does not show any injury on the surface of the body. It is one of the most vicious torture tools, and although outlawed, it is still being used in the labor camps]. They also tortured him with electric batons. The torture lasted for more than two hours. Every time he passed out, they would pour cold water on his head, and continue beating him.

When Wang Huachen gained consciousness, he told them "I want to talk to your captain." When only Captain Zhang was present, (Zhang Junsheng had already left) Wang said: "Stop beating me. You'll break all my bones. If I'm tortured again, I'll jump off this building." In this very dire situation, as a CCP member in law enforcement, Zhang Junsheng ignored Wang's life threatening emergency and proceeded to brutally beat and kick him while cursing him. He cried: "You show me! Go ahead and jump! I will keep beating you if you don't jump! "

Wang jumped and fell immediately unconscious. It was 6:30 p.m. when he jumped and he was down there naked and unconscious for two and a half hours. Nobody stopped to ask what was happening. Wang needed to be sent to the hospital for emergency treatment, but Zhang Junsheng was discussing ways to cover up his crimes with his accomplices. At 7 p.m., they searched Wang's home, but did not find any evidence they wanted. At 9 p.m., they finally sent Wang to the Lianshan District Hospital, and only then notified his relatives.

When Wang was sent to the hospital, he had many bone fractures. His entire body was full of cuts and wounds from being tortured by electric batons and from being beaten with sticks. His wounds were quite horrible (see pictures below). 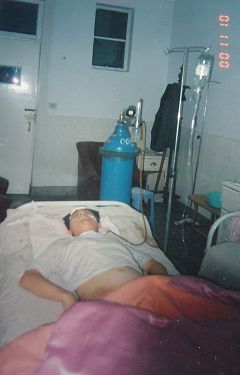 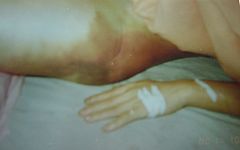 At 11 a.m., November 18, Wang passed away in the Lianshan District Hospital. In order to avoid responsibility, Zhang Junsheng retrieved an old arrest-warrant from November 16, and made up an accusation that Wang "committed suicide because he was afraid of his crime."

To hide the truth from the public, the authorities forbade reporters from interviewing people who knew the truth. They told some people and some companies: "If you are interviewed by reporters, don't let the situation grow..." In order to shirk his responsibility, Zhang Junsheng went around and bribed everybody above and below him. Wang Huachen's father had passed away long ago; he and his mother relied on each other and lived together. Wang's death brought much sorrow to his elderly mother. She cried profusely in extreme grief.

Even so, Zhang Junsheng still sent people to monitor Wang's mother and relatives outside Wang's home. He was afraid of them revealing the truth to others. When Wang's relatives argued with Zhang Junsheng, government executive officials refused to help, saying "Go sue wherever you want, he's dead, and so what!"

After learning and practicing Falun Dafa, Wang Huachen was consecutively honored as an "advanced worker" for several years. He was commended and awarded by organization officials many times, and for six straight years, he was honored as Jinhua Chemical Group's Advanced Producer. Everybody knew he was a good person. Wang Huachen's mother and relatives are in deep grief these days. His fellow workers are grieving as well, they all miss him very much.

“Regarding the Ways We Combat the Persecution”