Australia: A Parade and Rally Held in Melbourne to Support 16 Million Withdrawals from the Chinese Communist Party and Affiliated Organizations (Photos)

On December 16, 2006, a parade and rally were held in Melbourne to support 16 million withdrawals from the Chinese Communist Party and its related organizations. Falun Gong practitioners attended the activity and exposed the persecution against Falun Gong to the public. 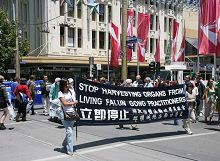 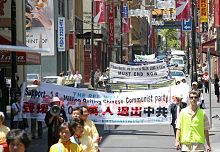 The parade passes through Chinatown. 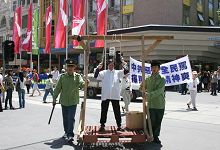 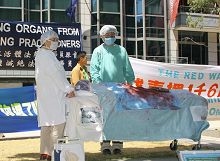 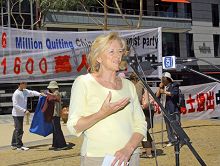 It was a warm day before Christmas in Melbourne, and the parade passed through town. After the parade, the attendees held a rally. Olympic Games champion Jan Becker, representative from the Service Center for Quitting the Party Wang Peng, Falun Gong practitioner Jiang Zhigang, and the secretary of the Association of China Democracy Movement in Melbourne Zhang Weiqiang gave speeches at the rally.

There have been rallies to support quitting the CCP in Melbourne whenever the number of withdrawals increased by one million. Recently there has been a rally almost every month.

Mrs. Luo, who attends every rally, said that she is very touched and happy to see so many of her Chinese compatriots wake up and quit the evil party. She said that there are many Chinese tourists in Australia and that it is very important for them to obtain information about quitting the party, so she is happy to pass on the information through the parade and the rally.

The Nine Commentaries on the Communist Party has been published for two years and 16 million people have quit the Party. Many Chinese people have changed their minds and behavior and more and more people recognize the evil nature of the CCP. Mrs. Li, a volunteer at the Service Center for Quitting the Party, said that, before, many Chinese tourists tried to avoid the parade and refused to take the fliers, but now, many people ask for materials and ask questions about quitting the party. She said that it is much easier to communicate with Chinese tourists now.

Many Chinese tourists go to Melbourne before Christmas. At the rally, there was a couple from Xinjiang. They saw an advertisement for the rally in the newspaper, so they came to the rally and asked for help to quit the party. The husband said: "I am a government official, but I hate the CCP very much. It made up its history and badly harmed our country. Who wants to be a member of it? I wanted to quit the party a long time ago, but I knew I would lose my job if I did. Since I still have to go back to China, I resigned with a fake name today." Many Chinese tourists were excited by the parade and took a lot of photos.