France: Attorney Fabrice Orlandi Says France Should Do Something to Condemn the CCP's Crime of Organ Harvesting (Photo) 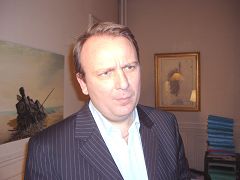 On November 28, 2006, at a routine public hearing held in the French Premier's Office Building, the French National Human Rights Advisory Committee invited the two Canadian independent investigators, Mr. David Kilgour and Mr. David Matas, to testify about the Chinese Communist Party (CCP)'s trade in organs harvested from living Falun Gong practitioners. After the hearing, the two Canadian investigators held a press conference at the law office of Attorney Mr. Orlandi to inform the media about their investigation and the public hearing at the French National Human Rights Advisory Committee.

Reporter: How do you view the Falun Gong group and the current persecution of the group in China?

I think what Falun Gong upholds is Chinese traditional culture and traditional thought, yet the CCP regards it as a kind of threat to its political power. Falun Gong is strong in China; Falun Gong practitioners outnumber the CCP membership. The CCP is a dictatorship and in order to eliminate perceived dissidents, the CCP felt they must annihilate Falun Gong. They now even use the method of organ harvesting to eliminate Falun Gong.

When I heard of the crime of genocide happening in China, I thought, "We must condemn the crime." The CCP removed corneas from some of the Falun Gong practitioners. It is only because their thoughts are different from the views of the authorities that they are imprisoned.

Reporter: In your opinion, how can we help bring an end to the persecution?

I think that France, as a human rights protector, should do something, even deny the Chinese the 2008 Olympic Games in Beijing, to condemn this crime.

What Attorney Matas, my counterpart, has said is meaningful. A denial of the 2008 Beijing Olympic Games will compel the athletes to condemn this crime, let them know what is happening there, and inform them, "We will not go to Beijing, where human rights are trampled on. This report gives full and accurate evidence." I think this would be a very good action to take.

Don't you think that people should have come to a quicker awareness that this is a crime of genocide related to each individual and each country?

Look at the example of Rwanda. Years ago the international organizations had already been informed of what was happening there, but they ignored it. One day it was verified that what they had been told was true. Perhaps in years to come, when the crime of genocide against Falun Gong is verified, we will be able to say that we had already condemned and exposed the crime in 2001 and 2002. But you, you should bear responsibility for this.

The well-known human rights lawyer in China, Gao Zhisheng, has been monitored, followed, beaten, and "illegally imprisoned" for a long period, just because he defended Falun Gong practitioners and submitted letters to the Chinese leaders to reflect the persecution of Falun Gong. Recently, his wife and children have been monitored and beaten. As his counterpart, what do you plan to do?

After being informed of the illegal arrest, we tried to intervene. We can make an appeal by signing a petition. Also, we can travel to China to intervene.

Regarding the arrest of our counterpart, I think we can call on all lawyers to jointly take action.

“Germany: "Give a Hand; We Can No Longer Keep Silent" (Photos)”