(Clearwisdom.net) Regarding Falun Gong practitioner Ng Chye Huay and Erh Boon Tiong being unlawfully tried and imprisoned by the Singapore authorities, the Falun Gong Human Rights Working Group (FGHRWG) submitted a human rights violation report to the UN recently. The report revealed Singapore's long-term violation of the fundamental human rights of Singapore's people, and reminded the international community to be clear about the Singapore government. 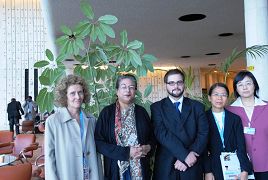 
In order to isolate practitioners, the administration in Singapore also threatened attorneys to prevent them from handling the case. Stemming from conscience and justice, the only human rights lawyer in Singapore, Mr. Ravi took the case. But Lee Kuan Yew's regime constantly harassed, threatened and even attacked Mr. Ravi. In September 2006, Attorney Ravi was invited to testify before the Human Rights Council of the UN, but he was taken away by police right on the day for departure, so he couldn't attend the meeting. Afterwards, he was forced to enter a psychiatric clinic, and was injected with some psychiatric drugs. Finally, Mr. Ravi's license for practicing law was revoked by the authorities.


Without an attorney, the two practitioners had to defend themselves. In court, without sufficient evidence and disregarding the dignity of the law, the judge ruled that the two practitioners were guilty, even though they conducted a strong defense of their innocence. Furthermore, the judge violated the legal process by not allowing the practitioners to appeal immediately, but put the two practitioners in prison. The court's unlawful activities ignoring human rights have defamed itself severely. How could the people of Singapore believe their government? Singapore's lack of rule by law has been clearly revealed to the international community.

The FGHRWG calls for UN to investigate and condemn the Singapore government's long-term violation of the International Human Rights Convention. FGHRWG also calls for attention from the international community over Singapore's violations of human rights .

“Thailand: Rally Held to Support 16 Million Withdrawals from the CCP and its Affiliated Organizations (Photos)”