(Clearwisdom.net) On December 10, 2006, World Human Rights Day, Falun Dafa practitioners in Malaysia were invited to participate in the Human Rights Day Parade organized by the Bar Association. The parade started at 8 a.m. from Independence Square in Kuala Lumpur, marched along Congress Road to the Congress Building, then turned into a park on the lake shore. After the parade, the organizers thanked the practitioners for their active participation. 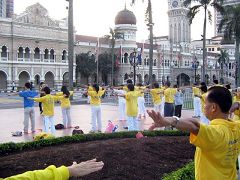 During the parade, the practitioners held up banners to expose the Chinese Communist Party's (CCP) persecution and organ harvesting atrocities, as well as large pictures of practitioners being persecuted or tortured to death in China. The practitioners also performed a short drama to re-enact the CCP's atrocity of harvesting organs from living Falun Gong practitioners. Some spectators were moved to tears. In addition to the group representing Falun Gong, another part of the parade represented those supporting people withdrawing from the Chinese Communist Party and its affiliated organizations.