Mr. Hu Yongjian and His Wife Arrested - Their Young Child and Elderly Parents Left Without Care 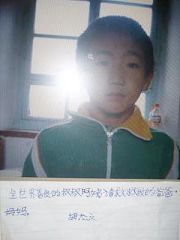 Mr. Hu Yongjian and his wife, Ms. Tang Yunli, are from the Sixth Village, Chengshanwei Town, Rongcheng City, Shandong Province. They have a ten-year-old son, Tianniu, and own a shop called "Dexin Shop." After the Chinese Communist Party (CCP) began its persecution of Falun Gong in 1999, Mr. Hu and his wife wanted to learn more about Falun Gong. After they heard the truth and realized that Falun Gong benefits society and individuals and does not harm anyone, they began to practice Falun Gong in 2004. They conducted their business, keeping the principles Truthfulness, Compassion, Forbearance in mind at all times.

In June 2004, when delivering goods, Mr. Hu found 3,000 yuan, a 50,000 yuan bank deposit, three ATM cards and the identification of the owner on the ground. Moreover, this person and Mr. Hu used to hate each other. Mr. Hu talked with his wife and they both thought practitioners should follow the Fa's standard and always consider others first. They returned everything immediately. The villagers were highly surprised and realized that the slander of Falun Gong they heard on television programs was false!

One evening in October 2005, Mr. Hu saw a drunken young man lying in the middle of an intersection. There were no lights. Mr. Hu and his wife helped the person to get home safely. One evening in May 2006, Mr. Hu saw that a young taxi driver from Northeast China was trapped in a car because of an accident. He had been calling for help for nearly two hours, but everyone hurried by and refused to provide help. Mr. Hu and another practitioner got him out of the car and took him to the hospital.

They are such nice people. Yet, Rongcheng City 610 Office agents Xing Jianping, Hu Zongwei, Liu Hongdong, along with Song Haibo, the CCP secretary of Chengshanwei Town, local police officers Wang Hongwei, Yu Jianxiu, the CCP secretary of the Sixth Village, public security officer Hu Baoyue, and others arrested them. They were taken to the Wangcun Forced Labor Camp in Zibo City, Shandong Province, leaving the 10-year-old child and parents, in their late 70s, at home without care.

At around 10:00 a.m. on the morning on February 22, 2006, because of a report from Yu Jianxiu, the CCP secretary of the Sixth Village, and six or seven policemen, led by 610 Office agent Xing Jianping, broke into their home and arrested Ms. Tang Yunli. They confiscated about 3,000 yuan. Ms. Tang was detained at Rongcheng Detention Center, and taken to Wangcun Forced Labor Camp in Zibo City on March 22.

Early on the morning of October 16, staff from Rongcheng 610 Office and Chengshanwei Town police arrested Mr. Hu Yongjian. His ten-year-old son, who already lost his mother's care, held onto his dad's legs and would not let go. Police grabbed the child and pushed him to the ground. When the young man whose life was saved by Mr. Hu from the traffic accident heard of this and went to the police station to try to appeal, he was driven out of the police station. Yu Jianxiu, the CCP secretary of the Sixth Village who sold Mr. Hu out, lied to Mr. Hu's elderly parents. He claimed that other practitioners sold Mr. Hu out.

Please find below contact information for those who persecute Falun Dafa practitioners:

“Ms. Xiao Huiqing Taken to a Brainwashing Session After Three Years in a Forced Labor Camp”