At noon on December 8, 2006, Falun Gong practitioners in Australia held a press conference in front of the Hilton Hotel in downtown Sydney and announced that Falun Gong practitioners Xie Yan and Li Fuying had filed a petition to New South Wales Supreme Court. They were suing Chen Shaoji, Vice Secretary of the Guangdong Communist Party Committee and Chairman of the Political Consultation Committee, who led a delegation to Sydney, for his crimes of illegal imprisonment and torture Falun Gong practitioners. The court papers were delivered successfully. Reporters from 2GB TV, NTDTV, and The Epoch Times attended the press conference and covered the event. 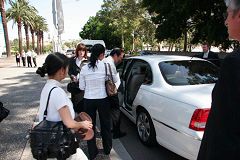 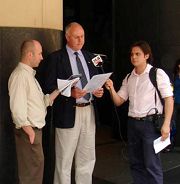 John Deller, spokesperson of the Falun Dafa Association Australia, said at the press conference that Guangdong Province is one of the most severe provinces in China in persecuting Falun Gong. Since July 20, 1999, Chen Shaoji actively participated in the persecution when he was Secretary of Guangdong Political and Judicial Committee and Director of the Provincial Bureau of Public Safety. He instigated, planned, ordered and motivated judicial staff and the public to hate Falun Gong. He also ordered, manipulated, assisted and instigated police to enhance the brainwashing and persecution of Falun Gong practitioners. As a result, practitioners in Guangdong suffered severe persecution. As of October 2005, the documented deaths of practitioners due to the persecution were 64. The torture means were extremely cruel. Chen led the 610 Office and ordered the persecution of Falun Gong. He must be held responsible for crimes against humanity in Guangdong.

One of the practitioners who filed the petition, Li Fuying, 78 years old, was illegally imprisoned in Guangzhou twice for persisting in the practice of Falun Gong. Her daughter Haiyu Yan was sent to Chatou Women's Forced Labor Camp for a two-year term without any legal procedures. She was tortured and forced to work 12 hours per day. After the term ended, she was forcefully transferred to the Chatou brainwashing center and detained in a small room less than 15 square meters together with 30 other practitioners. They were allowed to go out of the small room once every day. She was tortured physically and mentally. Ms. Li said, "Chen Shaoji was head of '610 Office'. Now he comes to visit Australia. It is time to bring him to justice." 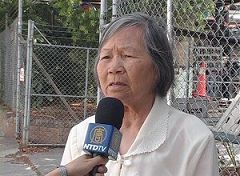 The other plaintiff, Xie Yan, said that she was imprisoned for two years and three months in a labor camp for distributing truth-clarification materials. She was tortured many times. A practitioner who was three months pregnant and imprisoned together with her was tortured to death. She is one of tens of thousands Falun Gong practitioners who have been persecuted. She was rescued and has escaped overseas. There are still many practitioners in Guangdong being tortured. Thus she would like to adopt legal means to sue Chen Shaoji and bring the CCP officials who are active in the persecution of Falun Gong to justice. 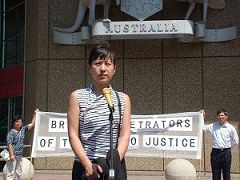 Chen Shaoji is the third high level official of Guangdong Province, after Guangdong Governor Huang Huahua and Secretary of Guangdong Communist Party Committee Zhang Dejiang, to be sued overseas for their participation in the persecution of Falun Gong.