On December 7, 2006, Australian Senators Andrew Bartlett (Democrats) and Kerry Nettle (Greens) and MP Chris Bowen (Labor) jointly held a press conference outside the Australian Parliament Building to announce the establishment of the Australian Delegation of the Coalition to Investigate the Persecution of Falun Gong (CIPFG). The delegation demands the Chinese Communist regime to open all labor camps and hospitals in order to allow CIPFG members to perform an independent investigation into the persecution of Falun Gong and the harvesting of organs from Falun Gong practitioners. Senator Bartlett said that the Australian delegation is ready to enter China to perform an investigation. Reporters from many major mainstream media outlets including TV 9, TV 10, ABC TV, Australia Press, 2GB Radio and SBS Radio attended the press conference. 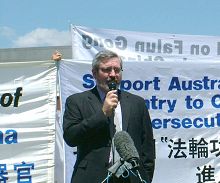 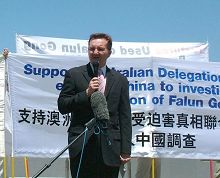 MP Bowen: "If allegations of organ harvesting are true, that is why they don't issue us visas" 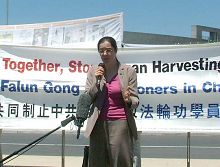 Senator Nettle: "The Green Party is very proud to support the investigation delegation to enter China" 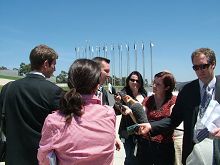 The press conference attracted many reporters from various mainstream media

Senator Bartlett: "I am willing to enter China to investigate, and I am ready"

At the press conference, Democrats Senator Andrew Bartlett told the press: "Australia has major trade and diplomatic relation with China; however, the government cannot thus overlook the allegations of the Chinese Communist regime's atrocities of harvesting organs from living Falun Gong practitioners." He believed that there were people from every political party who were concerned about this issue. He said that he was willing to go to China to investigate and he was ready, if they could perform an independent investigation without interference.

Senator Bartlett said that keeping continuous pressure on the Chinese government is very important. He told local practitioners that he can guarantee that many politicians from all parties are very concerned about this issue and believe that these allegations should be thoroughly investigated. He also hoped that the Chinese community will have a wide consensus in condemning these atrocities happening in China.

The Senator believes that human rights in China have in fact deteriorated in the past years, even though China promised to improve human rights when it was applying to host the Olympic Games. He said that now was the time to press the Chinese Communist regime to improve its human rights record. He also promised to continue to raise this issue in Parliament.

MP Chris Bowen: "If allegations of organ harvesting are true, that will be the reason that they refused to issue us visas"

At the press conference, Member of Parliament Chris Bowen said that the efforts to improve human rights in China have made some progress. For example, he said that the Matas-Kilgour report investigating allegations of organ harvesting are being read by more and more people and an increasing number of Australian hospitals have started to refuse to train Chinese surgeons. He said that he supported an independent investigation and demanded the Chinese Communist regime to issue visas to members of the investigation group. He said that the Chinese authorities have a very simple choice in which to deny these allegations, which is to allow independent investigations. If they believe that these allegations are not true, they shouldn't have anything to hide. If allegations of organ harvesting are true, that will be the reason that they refused to issue us visas.

Senator Kerry Nettle called on the Chinese authorities to allow investigation groups to enter all Chinese labor camps and hospitals without restriction, in order to perform on-site investigations. She said that the Greens Party is very proud to support the investigation delegation entering China and said that she will write a letter to the Chinese ambassador to request that the regime allow the investigation group to enter China and execute the recommendations made by Matas and Kilgour in their investigation report. She said that China has a long history of trampling on freedom of religious belief and human rights, as well as destroying the environment. Senator Nettle said that the Greens have been repeatedly urging the communist regime to pay attention to these areas.

At the press conference, a representative of the CIPFG also read a letter from a Christian priest to the Australian Prime Minister. In the letter, the priest requested his government to help the CIPFG, deny entry for Chinese doctors who have been involved in organ harvesting, request doctors to provide the source of organs used in transplants, and discourage academic exchange and cooperation between Australian research institutes and the Chinese government.

Wuhan Falun Gong practitioners sent a support letter to the CIPFG Queensland group. In the letter, the practitioners provided evidence of the illegal organ harvesting practice in Wuhan and invited the group to visit Wuhan first.