On December 3, 2006, Chiayi City Councilor Tsai Wensyu expressed his willingness to join the Coalition to Investigate the Persecution of Falun Gong (CIPFG). He said: "Harvesting organs from living people is a crude and inhumane crime." To safeguard human rights, he said that he had no choice but to join the investigation. 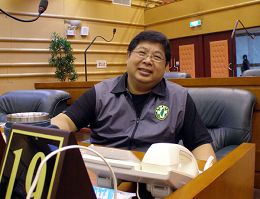 On December 4, the Taiwan Epoch Times reported: Since the Chinese Communist Party' s atrocities of harvesting organs from living Falun Gong practitioners was exposed last March, Chiayi Falun Gong practitioners have been working very hard to let local residents know about the atrocities. Councilor Tsai signed up to join the CIPFG at a meeting when he heard about this issue recently. Tsai also appealed to the public: "Such atrocities cannot be tolerated by Heaven and Earth. Everyone should condemn such an inhumane crime."

“Belgium: Letter from a Practitioner to Singapore Court Personnel”