Hungary: People Call for an End to the Persecution of Falun Gong (Photos)

(Clearwisdom.net) On November 1st 2006, Hungarian practitioners gathered at Blaha Lujza Square to clarify the truth of Falun Gong and expose the brutality of the persecution. 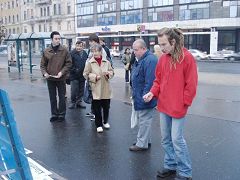 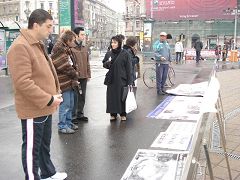 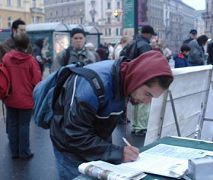 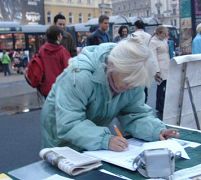 Hungarian people are concerned about the persecution against Falun Gong, and signing names to support Falun Gong.

They displayed posters, handed out flyers, collected petition signatures and clarified the truth to passersby. Many people stopped and carefully read the posters.

Many people were shocked by the evil nature of the Chinese Communist Party's 7-year persecution against Truth, Compassion and Tolerance.

A woman said "this persecution is evil! I just can't comprehend how someone could be so cruel. When I cut my finger I know it hurts, but how can these police officers [who persecute Dafa] live with themselves?"

Some people seemed to go into a trance when reading information excerpts from the Kilgour-Matas report.

Pointing to the posters, a man said "I can't believe this is still happening in the 21st century!"

Another man said the real problem was not with Falun Dafa, it was with the Communist Party, giving reference to similar forms of terror the Hungarians endured back in the Soviet Socialist regime.

A young man told practitioners the persecution is a big human rights crisis and deserved more urgent action than the current conflict in the Middle East or tensions between civilians and the Hungarian Socialist-led Government.

Later into the day it began to rain and the temperature dropped. Practitioners kept sending forth righteous thoughts and the weather held out. People kept coming and reading the posters, despite the cold.