(Clearwisdom.net) On October 28, 2006, the Second Latin America Falun Dafa Cultivation Experience Sharing Conference was held in Buenos Aires, Argentina. It was a rare gathering. It happened that the World Transplantation Day held a weeklong activity in Buenos Aires at the same time, at the end of October. Falun Gong practitioners coming from different places exposed the Chinese Communist Party's (CCP) organ harvesting atrocities to people attending the transplantation conference on the days prior to and following the Fa conference. 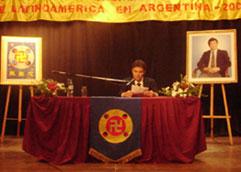 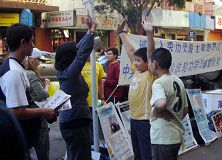 In Chinatown, people learn to practice Falun Gong on the spot 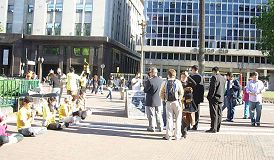 Clarify the truth to people attending the transplantation conference

Participants in the Fa conference included Falun Gong practitioners from many different provinces of Argentina, such as Tucuman, Cordoba, Santiago De Estero, Rosario, and Lujan, and practitioners from Brazil, Chile, Mexico and Panama. Practitioners shared their cultivation experiences, besides their understanding on Fa-rectification and the persecution happening in China. The focus of the sharing was on looking inward to find one's attachments and where they fell short, and making improvement together on the Fa.

In front of the Chinese Embassy in the rain, practitioners hold banners protesting the persecution 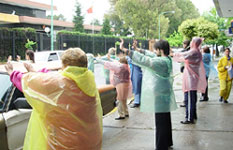 Performing the exercises in front of the Chinese Embassy 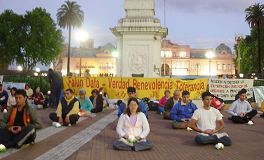 A candlelight vigil in front of La Casa Rosa, the Presidential Palace in Buenos Aires, to commemorate the Falun Gong practitioners who have died as a result of persecution 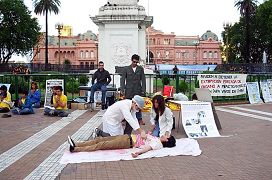 In the afternoon, practitioners demonstrated in front of the President's Office to expose the CCP's live organ harvesting. They also held a candlelight vigil. Fortunately, the rain was replaced with warm sunshine. On Sunday after the Fa conference, practitioners' truth clarification activity in Chinatown also met with the rain. But when practitioners did the exercises and sent forth righteous thoughts in the early morning in the park, the rain suddenly stopped and the sun appeared. Because of the weather change, there were many Chinese people from different places coming to the Chinatown to go shopping. Many people who saw practitioners practicing the exercises stopped to watch them. Since the CCP started persecuting Falun Gong in China in July 1999, many people have not seen people practice Falun Gong. Argentina Falun Gong practitioners expressed regrettably that they were sad for those Chinese people in mainland China who have been deprived of a favorable cultivation environment. They also pity Chinese people who have been abroad, but still are afraid of the CCP and dare not to practice the exercises. This proves that the CCP has extended its persecution overseas.

That day, Falun Gong practitioners in Argentina gave out thousands of truth clarification materials in Chinatown. The entire Chinatown was bathed in the warm spring sunshine, peaceful and wonderful. Chinese people from mainland China were also friendly, a great contrast to last year. At that time, practitioners often encountered verbal abuse while distributing materials. Some Chinese people who have been affected by the CCP's slander of Falun Gong, realized that they had been deceived by the CCP for so many years after listening to practitioner's truth clarification. Some people told practitioners that they knew the CCP is despicable, and some people said they had learned about the facts about Falun Gong. Some said they all condemned the CCP. In the past year, Falun Gong practitioners have distributed materials to Chinese people every weekend. At the beginning, some people did not believe that those who distributed the materials and newspapers are volunteers. Some asked how much Falun Gong paid them. After a year of contact, they have seen that these practitioners voluntarily distribute the materials. A handful of Chinese who have close contact with the Chinese Embassy are still rude to Falun Gong practitioners. The CCP's fate is doomed. In order to protect themselves, these people should keep away from the CCP, and not be deluded by the CCP's false images. The Chinese Embassy attempted to drive away practitioners and once instigated some Chinese business owners to not allow practitioners to distribute materials or display photo boards on sidewalks. They thought they were in China, but forgot that people outside China enjoy basic freedom.

Falun Gong practitioners around the world are speaking on behalf of tens of thousands of innocent practitioners who have been imprisoned in China for their belief. So long as the persecution is not stopped, practitioners outside China will not stop for a single day in exposing the CCP's atrocities.