Munich, Germany: Exposing the CCP’s Atrocity of Organ Harvesting from Living Practitioners and Supporting Withdrawals from the CCP (Photos)

(Clearwisdom.net) "Ladies and gentlemen, our gathering here today is not accidental. You can often witness such activities in all parts of Germany as well as around the world in places like Austria, Canada, Japan, Australia, the US, Hong Kong, and Taiwan," stated Helmut, a practitioner, whose baritone voice resounded in bustling Marien Platz. Activities in the plaza drew the attention of passersby and visitors. Large scale banners, display boards printed with photos and captions, together with an anti-torture exhibition, exposed a tragic chapter in human history: the Chinese Communist Party (CCP) organ harvesting from living Falun Gong practitioners. Meanwhile, the public was informed of the predicted end of the CCP, with 15 million Chinese people having already quit the CCP and its related organizations. 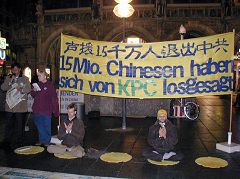 By the second anniversary of the publication of the Nine Commentaries on the Communist Party, Falun Gong practitioners in Munich had held activities for three weeks to support those people quitting the CCP.

On November 18 practitioners from Germany and Austria staged a rally in bustling Marien Platz in downtown Munich. The purpose of the activities was to recognize and support the 15 million Chinese people who have quit the CCP and its related organizations and to expose the CCP persecution of Falun Gong, detailing its atrocities against the Chinese people as well as its destruction of ancient Chinese culture. The rally completely disclosed the Party's evil nature.

By the second anniversary of the publication of the Nine Commentaries on the Communist Party, Falun Gong practitioners had held such activities in Marien Platz, Munich on three successive Saturdays. The rally drew the attention of numerous locals and visitors. People condemned the CCP’s persecution of Falun Gong. Many signed the petition calling on the German government to help end organ harvesting from living practitioners.

Among the numerous visitors, quite a few were tourists and officials from China. As overseas tourists, they had personally experienced the overwhelming tide of quitting the CCP. The Chinese solemn statements posted on The Epoch Times website were exhibited on the display boards. Many of the Chinese tourists daringly lingered in front of the display boards, took photos of and videoed the activities, and also accepted the leaflets distributed by practitioners. Some even expressed their willingness to quit the CCP shortly after talking with the practitioners, while others observed the activities from afar and gave approving smiles after listening to the defection song. Yet there were some who were still so poisoned by the CCP’s deceitful lies or were not brave enough or were unwilling to accept the leaflets. A small number of individuals even argued illogically with the practitioners.

Dr. Rosenberger and his son happened to pass by Marien Platz. Informed of the CCP atrocity of organ harvesting from living Falun Gong practitioners, he hardly could believe what he had just heard. At once he asked for further details. After understanding the facts, he and his son both signed the petition without hesitation, solemnly calling on the German government to help end the CCP’s atrocity. Dr. Rosenberger told the reporter that he was quite shocked after realizing what was going on during this current persecution. Above all he thought that action should be taken to urge people from all walks of life to bring a prompt end to the tragedy. As a doctor, he was asked what he thought of his counterparts in China who were involved in harvesting organs from living Falun Gong practitioners. He commented that what these doctors were doing was completely against the Hippocratic Oath and against a doctor's lifelong obligation. In his opinion, practicing medicine was a sacred profession to relieve people's mental and physical pain and not a tool to earn one’s living by harming human lives.