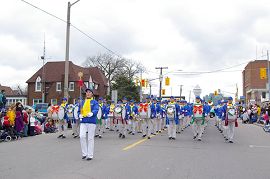 Toronto Divine Land Marching Band composes of 150 Falun Gong practitioners. Band coordinator Fan Jiang said that it was the first time for the band to participate in three parades in eight hours in one day. The members were excited and their performances were great. "The organizers are very satisfied with our performance and expressed their appreciation repeatedly." He said.

At the Niagara Christmas Parade, when the band was passing the stage, the host introduced Falun Dafa, "Falun Gong practitioners bring the beautiful blessings to you all. This is a large scale marching band from Toronto. This is their first participations in our parade. Let's welcome them." The spectators gave them warm applauses and cheers. When the band was playing the song "Falun Dafa is good", the host spoke to the audience, "Lets dance with the rhythm." The band performed two pieces of music in front of the stage and marched on.

The organizer of Niagara Parade told reporter that the Band was very good and they wanted to invite to the city's Canada Day Parade too.

Three parades in one day.

Mr. Fan Liao is a Falun Gong practitioner who came to Toronto 3 months ago from Mainland China. He plays trumpet in the band. Liao said, "Participating in three parades in one day was very exciting. I started to practice Falun Gong in 1996 when I was eleven years old. In mainland China, I didn't have the chance to promote and validate Dafa this way. Shortly after I came abroad, I luckily joined Toronto Divine Land Marching Band. I feel honored."

"The most impressive thing I met is that the western society welcomes and very friendly to Falun Dafa. People cheer us, and some even shout 'Falun Dafa is great.' Some press their hands together to salute to us. Even when we boarded the bus after the parade, passersby waved at us and say thank-you." He continued.

Liao said in the end, "During the parade, I was excited to see that so many people can experience the beauty of Falun Dafa. At the same time, I am sad that there are still thousands of Falun Dafa practitioners being tortured and persecuted in China, and a lot of people are poisoned by Chinese Communist Party's propaganda."

At the end of the band were two sousaphone players. The sousaphones weigh about 60 lbs. One of them was Zhaopei Zhang, who doesn't look very big comparing to the sousaphone. Zhang said, "This is my second parade in the band. Today we were in three parades and the feelings of each were different. The first one was about two hours. I felt OK after the parade. For the second one, my arm got sore and I had some back pain about half way through. The sousaphone felt so heavy on my shoulder that my body felt almost crushed. I was reciting Master's word 'It's hard to do, but you can do it' repeatedly. It felt like the time passed so slow but I made it to the end. At that time, my left arm couldn't move at all. Another practitioner helped me to put down the instrument."

I asked him, "Then how could you make the third parade?" Zhang said, "When the third parade was about to start, I actually hesitated if I wanted to participate. But since the band has only two sousaphones, it would have a big impact on the whole band if I dropped out. So I decided to participate. Like a miracle, I completed the parade easily. When we arrived at the end, I still felt I had a lot of energy."

Zhang said, "During this procedure I understood that Master was using this method to increase my capability of endurance. Whenever we meet difficulty and feel painful, if we can persist with what we do, the result will be just like Master said, 'the shade of willows, the blooms of flowers, a place to rest my head'."(Zhuan Falun, The Ninth Talk)